Down Jersey DX Picks
Down Jersey DX Extra! : It’s another slow start to 6 Meters this season, but activity is picking up. So far this year by mid-May, we have had a total of 7 sunspots (tiny though they might have been) from new solar cycle 25. Let’s hope for more to come our way as soon as possible!!!!

Entity of the Month 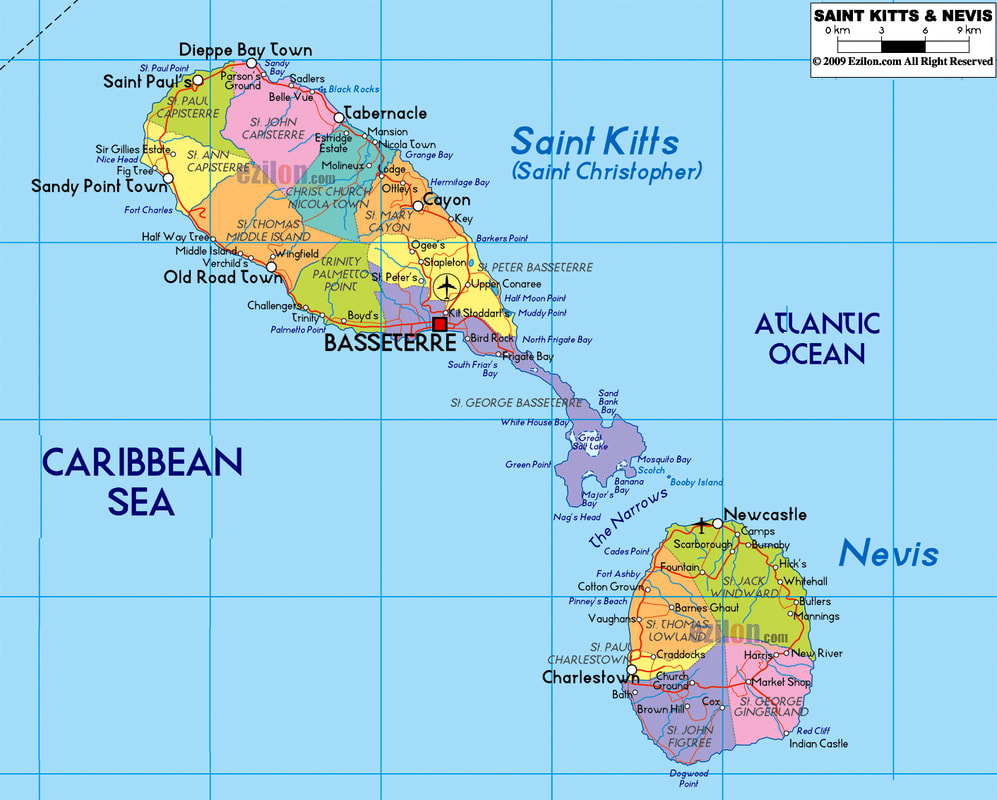 Saint Kitts, also known more formally as Saint Christopher Island, is an island in the West Indies. The west side of the island borders the Caribbean Sea, and the eastern coast faces the Atlantic Ocean. Saint Kitts and the neighbouring island of Nevis constitute one country: the Federation of Saint Kitts and Nevis. Saint Kitts and Nevis are separated by a shallow 2 mile channel known as "The Narrows".

Saint Kitts became home to the first Caribbean British and French colonies in the mid-1620s. Along with the island nation of Nevis, Saint Kitts was a member of the British West Indies until gaining independence on 19 September 1983.

The island is one of the Leeward Islands in the Lesser Antilles. It is situated about 1,300 miles southeast of Miami, Florida, US. The land area of Saint Kitts is about 65 sq miles, being approximately 18 miles long and on average about 5.0 miles across.

Saint Kitts has a population of around 40,000, the majority of whom are of African descent. The primary language is English, with a literacy rate of approximately 98%. Residents call themselves Kittitians.

Brimstone Hill Fortress National Park, a UNESCO World Heritage Site, is the largest fortress ever built in the Western Caribbean. The island of Saint Kitts is home to the Warner Park Cricket Stadium, which was used to host 2007 Cricket World Cup matches. This made Saint Kitts and Nevis the smallest nation to ever host a World Cup event. Saint Kitts is also home to several institutions of higher education, including Ross University School of Veterinary Medicine, Windsor University School of Medicine, and the University of Medicine and Health Sciences.

During the last Ice Age, the sea level was up to 300 feet lower and St. Kitts and Nevis were one island along with Saba and Sint Eustatius (also known as Statia).

St. Kitts was originally settled by pre-agricultural, pre-ceramic "Archaic people", who migrated south down the archipelago from Florida. In a few hundred years they disappeared, to be replaced by the ceramic-using and agriculturalist Saladoid people around 100 BC, who migrated to St. Kitts north up the archipelago from the banks of the Orinoco River in Venezuela. Around 800 AD, they were replaced by the Igneri people, members of the Arawak group.

Around 1300, the Kalinago, or Carib people arrived on the islands. These agriculturalists quickly dispersed the Igneri, and forced them northwards to the Greater Antilles. They named Saint Kitts "Liamuiga" meaning "fertile island", and would likely have expanded further north if not for the arrival of Europeans.

A Spanish expedition under Christopher Columbus arrived and claimed the island for Spain in 1493.

The first English colony was established in 1623, followed by a French colony in 1625. The English and French briefly united to massacre the local Kalinago, and then partitioned the island, with the English colonists in the middle and the French on either end. In 1629, a Spanish force sent to clear the islands of foreign settlement seized St. Kitts. The English settlement was rebuilt following the 1630 peace between England and Spain.

The island alternated repeatedly between English (then British) and French control during the 17th and 18th centuries, as one power took the whole island, only to have it switch hands due to treaties or military action. Parts of the island were heavily fortified, as exemplified by the UNESCO World Heritage Site at Brimstone Hill and the now-crumbling Fort Charles.

Since 1783, Saint Kitts has been affiliated with the Kingdom of Great Britain, which became the United Kingdom.