Most of you are probably familiar with software-defined radios - the USB sticks that can receive radio signals from AM broadcast into the microwave region using your computer to process the signal. Well, a bunch of smart guys have stuck four of those things into one case, connected them together, and built a "Kerberos” radio that can do a lot of cool stuff. K2QA and I each bought one, and I took it out to the Clubhouse this week for some development.

I'm specifically interested in its application in direction finding, first as an interesting development project and also to put the fear of God into N2GXJ and other fox hunters that technology was about to overwhelm skill in hidden transmitter hunts. And while that fear of God is still far off, it looks like this stuff is going to work.

The idea behind Kerberos direction finding is to put several antennas in a line and see which one receives the radio signal first. The first antenna to receive the signal is the closest to the single source; hence it points out the direction from which the signal is originating. As you can imagine, with radio signals moving at the speed of light the timing difference between two relatively close antennas is miniscule, but the developers have actually worked this out and the software can discern this difference. The Kerberos radios were developed as a Kickstarter project and are packaged in a box. The software runs on a Raspberry Pi computer, which because of the high CPU load of running 2 SDR radios, I encased it in a heat sink enclosure with two fans on it, similar to that used on the GOES satellite receiver that also has a high CPU load. Figure 1 shows only 2 antennas connected; the radio is powered by a USB-C connection and the Pi by a standard mini-D connector. 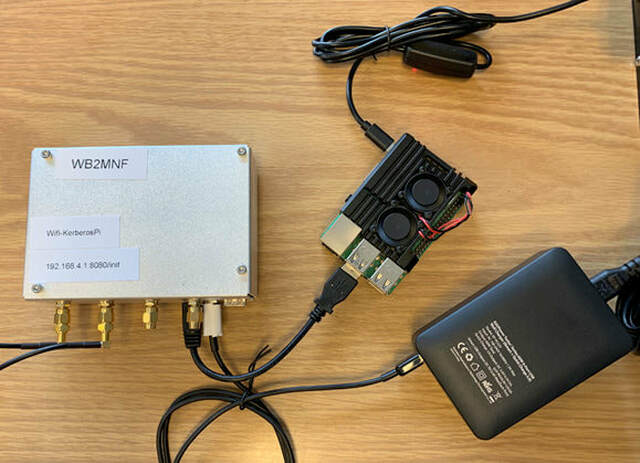 Figure 1
​The optimal antennas for this arrangement is four antennas arranged in a line with the antennas placed 1/3 to 1/2 wavelength apart, so for 2 meter reception I glued four large washers to a 6 foot 1x2 and stuck 4 mag mount verticals onto the washers. This gave me a set up like the one in Figure 2. 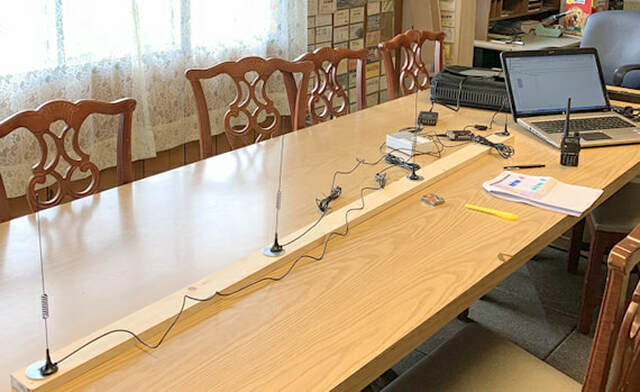 Figure 2
As you can see, the Kerberos radio and Raspberry Pi are connected to AC power, which obviously limits their portability, but I'm envisioning powering them with USB battery packs in actual operation. The Pi communicates with the computer through a Wi-Fi connection and a web browser and can be located away from the radios. All of the processing occurs in the Pi, so the computer doesn't need to be particularly powerful and could probably be replaced by an iPad or some other more portable device.
​
The direction of the signal sources displayed on the computer on a line graph, with the peak of the line indicating the direction of the signal, as shown in Figure 3. 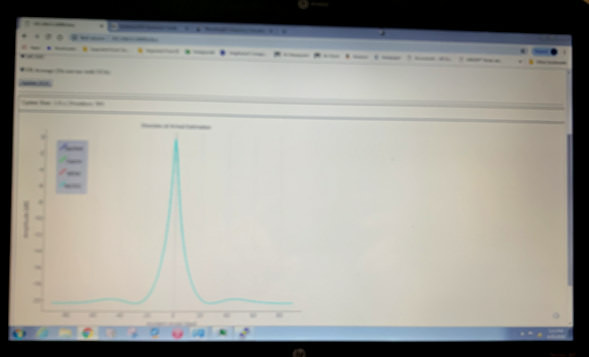 Figure 3
In testing within the Clubhouse using a HT as the signal source I could definitely see the peak of the curve move as I walked around the table, but couldn't completely correlate it with the location of the HT. These radios are subject to signal reflection, much of which probably occurs within the Clubhouse. I need to do some testing outside when the weather is more conducive, but at least these initial tests are promising. Hopefully, before the end of summer, we’ll have one of these on an actual fox hunt. So if you see a couple of guys walking around with a long piece of wood on a fox hunt, you’ll know what’s happening.
the sweep and just tried to run as much as possible. Being low power, it was a lot easier to hold a run freq on 80m than 40m on Saturday. And after most of the big guns on Sunday moved from 20 to 40, I was able to have a solid run on 20m.” His >900 QSOs on 80 and 20 meters would’ve won the category by themselves.

In contrast, KS4AA operated only on 40 meters (“I thought there was a single-band category...oh well!”), snagged all but one multiplier (never found a VO station), and still made the top five! Not unexpectedly in times of poor propagation, the scores in the low power categories take a bigger hit. Last year’s Top Ten SOULP scores ranged from 207k to 85k, this year they spanned 186k to 70k.

On October 14, 2018 several members gathered at the Clubhouse for an AREDN LAN party. AREDN is the Amateur Radio Emergency Data Network and this was a follow-on activity to the Tech Saturday October 6th presentation by Randy Smith WU2S of the AREDN Project.

Several Ubiquiti Nanostation devices were upgraded to become AREDN nodes. There were experiments performed to further understand the mechanics of building both infrastructure and ad hoc mesh networks. Range tests were performed at various places on the 4H fairgrounds to get a feel for the performance of the devices.

What is changing?
The super popular WSJT-X software package is getting a major update this December. As part of this update, the messaging formats for FT8 and MSK144 protocols are being changed. These changes allow for more bits per message, and greater error correction on those bits for even better weak signal performance, along with some other improvements. However, these new message formats are not compatible with the versions in use today. An early version is in beta testing now. Here’s what you need to know.

How does this affect me?
If you are a digital modes contester, hold onto your hat! As described in the October 17 quick start guide for experienced users, “these changes enable new message formats for efficient, robust QSOs in North American VHF contests, European VHF contests, ARRL Field Day, and the ARRL RTTY Roundup”. I’ll let that sink in for a minute.

It was just last month, in the October 2018 Crosstalk article titled “Where’d Everybody Go?” that the undeniable influence FT8 is having on our hobby was discussed. One of the last questions asked was “How about an FT8 field day mode?” Well, there it is! FT8 just became contest mode capable, and this is all blessed by the ARRL. I’d expect to see some “FT-8” mode only contests springing up soon. Love it or hate it, FT8 continues to innovate, grow, and evolve. Let’s see where this goes from here. Hey 2019 Field Day chairman, sign me up to operate a field day digital mode station now!
​​
Example ARRL Field Day exchange mode being added to FT8

I’m not interested in contesting with FT8. Do I need to update my current software?
Yes. The new and old versions of the protocols are not interoperable. The version 1.x protocols in use today are going to be obsolete. The current 1.9.1 version of FT8 and MSK144 will no longer be supported. It’s not a stretch to predict that by year’s end, if you want to have QSOs in FT8 with most anybody, you’ll need to be on the new 2.0 version or you’ll have next to nobody left to have contacts with.

To be fair, most, but not all the improvements involve contesting. There are other improvements in the new version non-contesters may benefit from as well. For example, it is described that the WSPR decoder has better sensitivity now by about 1 dB. For FT8, symbol rates and occupied bandwidths are the same as before, but decoding sensitivity is slightly improved and false decode rates are described as being significantly lower. To help you search for, and catch that rare missing DX, color highlighting of decoded stations now lets you identify missing DXCC entities on a per-band basis. Additional color codings can now let you know if the station is an active LoTW user or not, using information automatically downloaded from the ARRL web site, to improve your odds of picking a station likely to confirm your QSL.

Can I participate in beta trials of the 2.0 version while it is still in development?
Yes. On-air testing with the new protocols started in September. You may already have noticed some strange new signals on the waterfall during this testing period at the high end of the current FT8 watering holes. Look for them near 7.078 and 14.078 MHz on your radio dial. You can participate in the trial period by downloading the latest release candidate (rc) for WSJT-X 2.0 from the official website: https://physics.princeton.edu/pulsar/k1jt/wsjtx.html. See the quick start guide for experienced users linked from that site for more details associated with configuring the software for 77-bit messages and for special operating activities.

When is the official switch over when we need to be on the new version?
The release of a generally available (GA) version is scheduled for December 10, 2018. By design, this release schedule makes WSJT-X 2.0 usable for the ARRL sponsored January 5-6 RTTY Roundup and January 19-21 VHF Sweepstakes.
​​