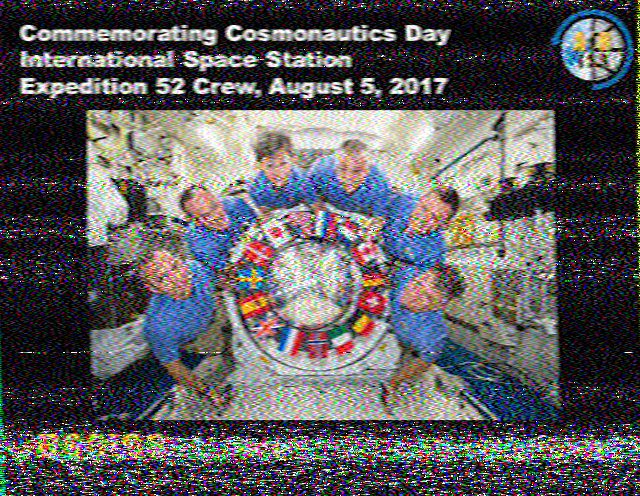 Over the weekends of February 8 to 10 and 15 to 17, 2019, the International Space Station transmitted Slow Scan TV (SSTV) images during its passes over the earth
​
Once received, images can be posted and viewed by the public at:
http://www.spaceflightsoftware.com/ARISS_SSTV/index.php.
In addition, you can receive a special SSTV ARISS Award for posting your image

Below are all 12 images that were sent from the ISS
​ 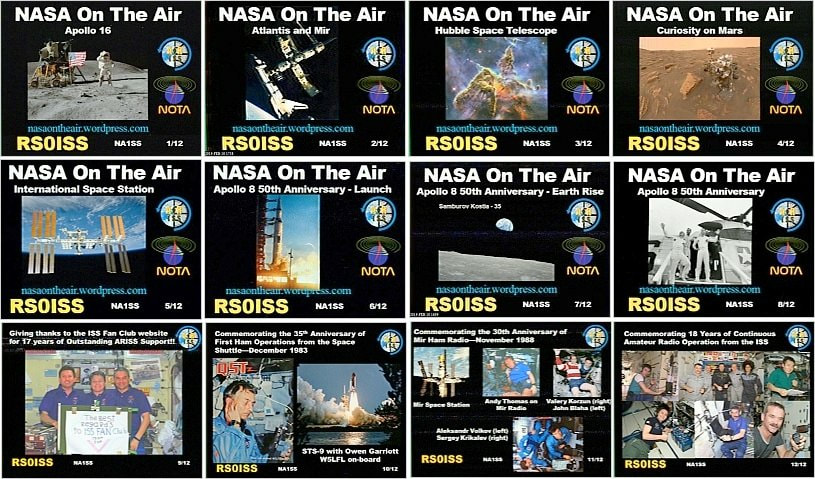 ​Here are some Club member observations and images that they captured during those passes.
SSTV Software for Android or iPhone
By Bruce Canino, KD2LBU

Last month I gave a brief overview of my low-cost way of getting SSTV signals from the International Space Station. This month I will talk about software. You will need some SSTV decoder software. I used an Android tablet which I already owned and Robot36 - SSTV Image Decoder software. Just go to the Play Store and search for SSTV and you should be able to find it. It is free software, just click install. If you search YouTube, you can find several videos that play back SSTV sounds. I tested the software just by holding my tablet to the speaker of my laptop and playing the file. The software did a pretty good job of figuring out the mode and capturing the image. When I used it to capture images from the ISS, I found it better to pre pick the mode PD 120 and then pausing the software. In tests it didn’t always switch to the right mode. It’s helpful to turn down or off your squelch of you radio, just listening for the signal to start. Even if you haven’t heard the signal before, you will know it when you hear it. Hold the input of your device to the speaker of your handheld and when you start receiving the signal, un pause the software. Sometime the image autosaved, other times it didn’t, so press the save image button just to be sure before the image start to overwrite itself.

The install page also has a link to a schematic for a cable to hook the audio out to head phones to microphone in. I didn’t try that, but I am sure you would get a cleaner image, by blocking out the outside noise. While I ran it on a tablet, I am sure it would also work well on an Android phone.

If you have an iPhone or iOS tablet, there is: SSTV Slow Scan TV 4+ by Black Cat Systems. The cost is $2.99 in the App Store. I don’t have any experience with this software, but should work pretty much the same.

I welcome anyone to report on their experiences with SSTV, especially the iOS users.

Over the weekends of February 8th to 10th and then again February 15th to 17th, the International Space Station transmitted Slow Scan TV images. The images were sent in PD120 mode every 4 minutes. The images take about 2 minutes to send and were followed by a 2 minute quiet time.

Several Club members attempted to receive these images with very different setups. The method I used was probably the simplest and cheapest to try. The receiver was my $35 Baofeng UV-5R+ HT with the stock rubber duck antenna and an Android tablet which I already own. The software I used to decode the images was Robot36, a free download for Android. The connection between the HT and Android was just holding the tablet next to the speaker of the HT.

Since the space station seem to hold these events every so often, I would like to relay my experiences in the hopes someone may try it next time when you realize you don’t need a complicated or expensive setup to do this.

This month I will talk about the receiver. You can use just about anything that will receive at 145.800 MHz in FM mode. Also, you don’t need any special antenna to start out. The stock duck on my unit worked just fine. I was outside and I usually tried to find an open area to be in with the best line of sight to where the AOS (Acquisition Of Signal) and LOS (Loss Of Signal). I will talk more about that next month when I go into finding out what times and the path of the ISS for each pass over your area. Try picking an area away from noise sources help too. The other thing that helps is turning down the squelch or completely off. You will hear the noise, but you will be able to pick up the tone coming through if the ISS is transmitting when you get AOS. If you are reading this newsletter, I pretty much guess you already have at least one HT that receives 2 Meter FM. To setup for the ISS tune it to 145.800 MHz simplex FM mode. You don’t want any offsets, PL codes, tone etc. That is the end to setup to receive. If you want to, save that setup into one of the memory slots to pull it up easily later.

Next month I will talk about setting up a tablet or phone with the software to decode the image coming from the radio. 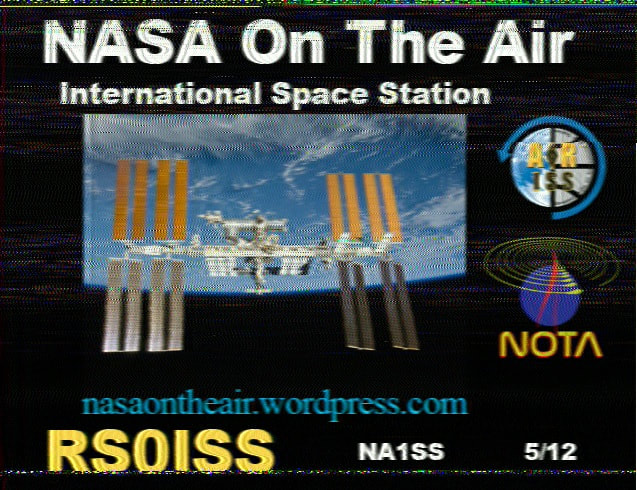 Don't know if this is Crosstalk worthy enough, but here are the images that I received in Pitman during this weekend's SSTV transmissions from the ISS. I used a Kenwood TH-D72A, tuned to 145.800 MHz, stood on my back porch at the appropriate times, and recorded the sound (it sounded like a fax machine) coming from the Kenwood's speaker with a digital recorder. I then played back the recording to the microphone on my laptop while running the MMSSTV software, and got the images attached.

2) ISS SSTV_021719_0841 : Received at 8:41 am on Sunday, 2/17, when the ISS was at an azimuth elevation of 79 degrees. The receiving location is in a neighborhood with lots of closely spaced houses and large trees. I had expected this image to be the best, due to the high azimuth elevation, but that's not what happened. 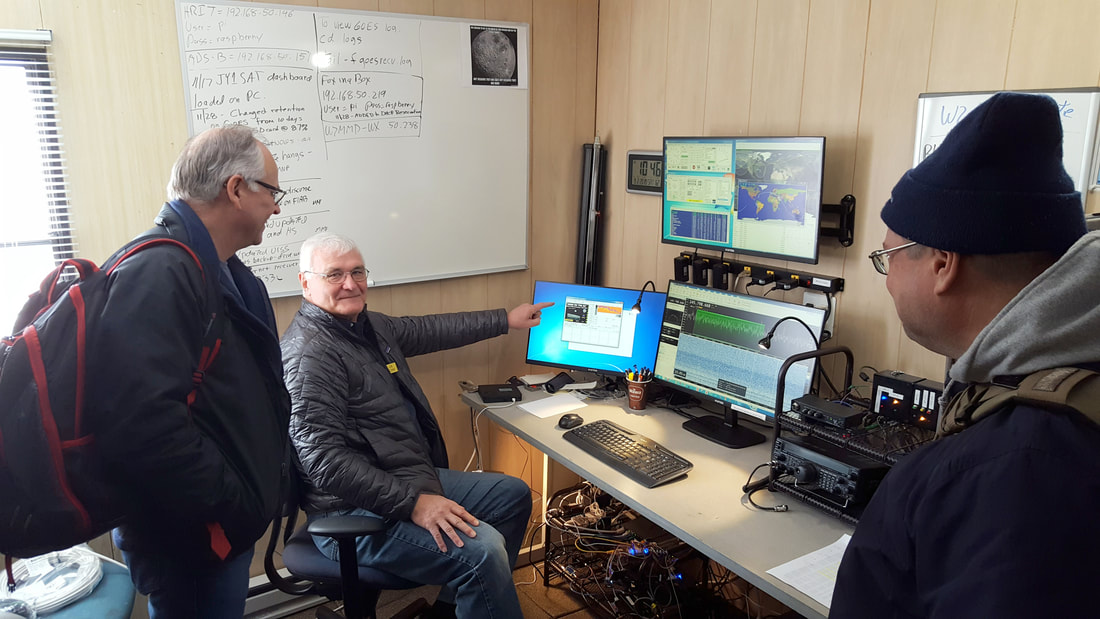 Picture taken on Saturday, February 9, 2019, at the Clubhouse VHF/UHF/Satellite Room. Jon WB2MNF is pointing out one of the first SSTV images captured from the ISS with Michael N2MMC and John K2ZA watching.