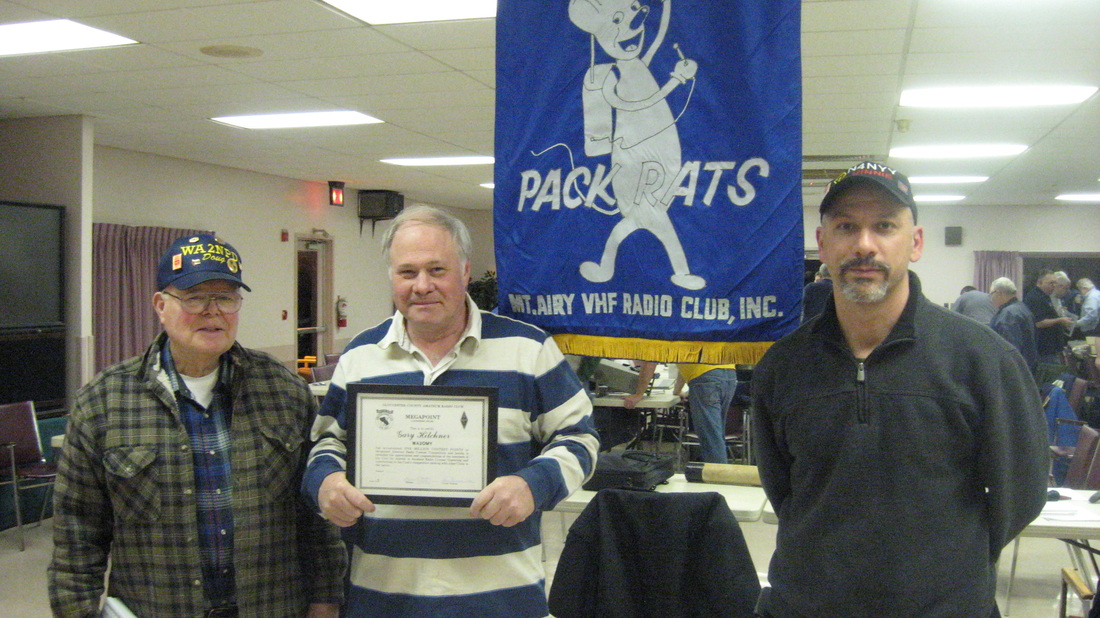 At our January 2011 General Meeting program, a slideshow was presented by Doug Gehring, WA2NPD, about various ham radio awards. During the slideshow, one of the slides was for a Megapoint Award earned by Gary Hitchner, WA2OMY, who was a teenage ham with the Club during the late 1970s. The award is given out by the Club when a ham contester achieves 1 million contesting points.

When I asked if Gary was still with the Club, Doug said no. He said that Gary had either started a job or had gone away to college, around 1979, and was never seen or heard from again. Gary had never received the award that he had earned. So that night, I checked QRZ, and saw that he was still a ham. I then Googled, and found him with the Mt. Airy VHF Radio Club (also known as the Pack Rats) in Southampton, PA.

I contacted their club president, Doc Whitticar, W3GAD, and set it up for the GCARC to finally present Gary with his award, at one of their general meetings. On Feb 17, 2011, Doug and I attended the Pack Rats general meeting, and finally presented Gary with his award, more than 30 years after he achieved it! It received a great reception, and everyone got a kick out of it!

Congrats to Gary Hitchner on his award!  It is better late, than never, even if it is after 30 years!

Riley has graced the Gloucester County Amateur Radio Club with his insight and friendship on a number of occasions.

​His personality, professionalism, and unique background are demonstrated in his public speaking engagements as he also gives us encouragement while we work toward the future of Amateur Radio.

If you were unable to attend our last general meeting where we had our Software Defined Radio presentation then you might be interested to know that you can listen to the entire audio portion of the presentation. One of our members was kind enough to record the entire audio and created the YouTube audio below.
May 2, 2012 Meeting Presentation - Digital HF
WAS and DXCC with just an attic antenna and low power?  You bet!  Find out why the digital modes are making radio fun and exciting again for both new and old hams alike.  Our guest speakers for the evening are Ken, N2CQ, and Jim, N2GXJ, both digital enthusiasts and members of the European Phase Shift Keying Club.  They will introduce the digital modes, and the basic hardware and software you will need to get started.  There will be audio and visual demonstrations of popular signal modes you might encounter, including:    Support for reverse-beaconing networks, and the growing popularity and ease of electronic QSLing will be introduced.
Think you are already a digital expert?  Put your skill to the test while hepling to mentor others!  If you have a laptop with a built-in microphone, bring it to the meeting.  We will pair up into teams to play a few rounds of "decode that signal"!  Bragging rights to the victors?  Sure thing!  CU there!

Web links that were featured in the Digital HF presentation

Reverse-beacon network - automatically see where your digital signal is reaching

Certificate award presented on August 1, 2012 to Doug Gehring, WA2NPD for fifty+ years of outstanding service to the Gloucester Amateur Radio Club.  Doug was also given new vanity car license plates and a license plate frame.
August 17, 2012
To GCARC Officers, Board, and all Members,
I want to thank all of you for a most wonderful, surprise presentation at our last Club Meeting.  I was presented with a most warm certificate of appreciation, new car Ham license plates, and photos of Ham activities, etc., etc. for my years of service to the Club.  Although singularly debatable, I willingly accept this most delightful expression from the Club with much humility.  The other day, I attached the new plates to my, uh, car, and the XYL immediately noted that the plates were far to good looking to be placed on my rather old car.  Guess, I will have to break down and buy a newer car in order to go with the plates.  For those who came in late, I had major surgery last May and want all to know that I am successfully still recovering from that ordeal, but am getting there day by day.  Takes longer when you have been a ham for 52 years (HI).  Continued 73’s to all.   De Doug, WA2NPD (Silent Key 2012)
September 5, 2012 Meeting - VHF and Up!
There’s a whole world of amateur radio above HF enjoyed by radio enthusiasts the world over, available to all Technician class amateur license operators and above.  For example, September 8-10 are the dates of the ARRL's VHF QSO party.  Later in the month is the 10GHZ and up contest. In October, comes the international 2.3 GHz and up Earth-Moon-Earth contest, where stations attempt to use the moon as a reflector to make their long distance contacts.  Amateur radio satellites often are designed to communicate on VHF and above.  Our W2MMD repeater system uses VHF and up frequencies.  How do these systems work?  What does it take to operate on these frequencies?  What about antennas?  Our guest speaker for the evening is our former club president, and accomplished high band operator Al KB2AYU.  A variety of topics will be covered this night. Come on out and find out what it takes to have some 'upper bands' fun!
Emergency Communications - October 3, 2012

Do you know what to do in times of disaster? (after all, this is 2012! J). It has been said that when all else fails, amateur radio can still get through. But are you prepared? Experienced club member Gary N2QEE, with help from our ARES Section Emergency Coordinator, John K2ZA, will introduce the topic of emergency amateur radio communications, and the steps you need to take now to be able to provide useful assistance if called upon to do so in the future.

EME (moonbounce) attempt at the Clubsite!
As described in this month's Crosstalk, this weekend is the first weekend of the ARRL International EME Contest.
Al, KB2AYU intends to attempt to work the big guns using the digital mode WSJT from our clubhouse. Since our antenna cannot be elevated, we will only have an hour or so of operating time at our moonrise and moonset.
The start times are as follows:
11/3 00:46Z (Friday night 8:46pm local)
11/3 15:30Z (Sat afternoon 1:30pm local)
11/4 01:39Z (Sat night 9:39pm local)
11/4 16:10Z (Sun afternoon 1:10pm local <- "fall back", daylight savings time!)

EME Attempt #2 at the Clubsite By Al, KB2AYU
The second weekend of the ARRL International EME (moonbounce) Contest is the weekend of December 1-2. I will be attempting to work the big guns using the digital mode WSJT. I am hoping to have better luck this time as most of the kinks have been worked out. Since our antenna cannot be elevated, we will only have an hour or so of operating time at our moonrise and moonset. (Moonset times are an hour before moonset). The start times are as follows:
Anyone is invited to stop by. Call the Clubhouse first to make sure someone is there. The number is 856-478-4738.

Below is a 40 second .wav file of one of the stronger stations I worked off the moon. If you have WSJT on your computer you can decode the message and see who I was working. The mode is JT65B. Remember, this 2 meter signal traveled 500,000 miles and is being received by just a single 12 element yagi. 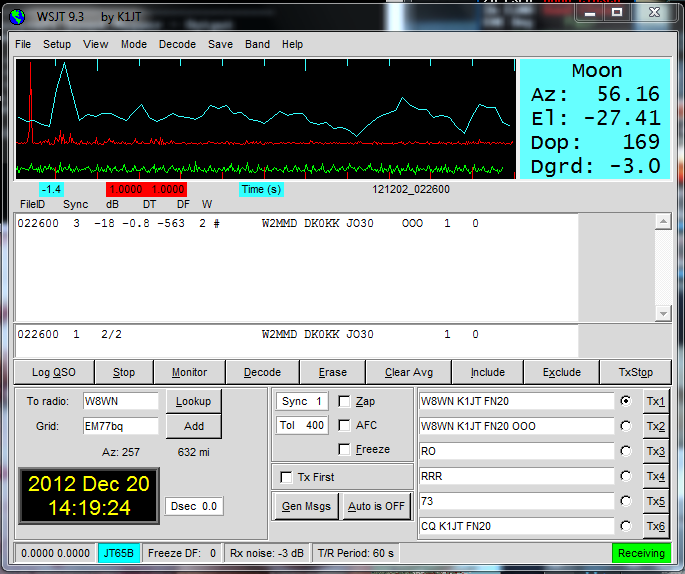 Following the club officers election, this part of the evening is a relaxed, informal, and popular program where club members have the opportunity to stand up and share a few words about how they first got interested in ham radio, and what they like most about our great hobby today.