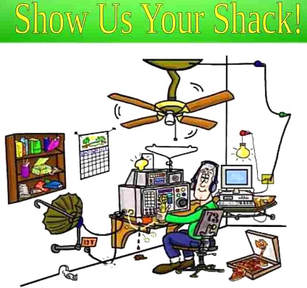 Mario Tagliaferri, W3CGS : Here are a few pictures of my shack. ​It truly will be a work in progress

I was licensed in March 2018 as KD2PLH at an exam cram session at the Trenton Computer Fair. I surprised my dad, Steve W2TDS, on Father’s Day by showing him my license inside his car. He was so thrilled that the next day my mom and dad drove to HRO in Delaware to buy a Yaesu FT-857d for me. They came down to my house the next weekend with the radio and the antenna you can see on top of the ham shack. I was able to hit a few local repeaters, but not too many. But I was on the air!

My ham shack is in my living room in an old CRT entertainment cabinet. See Picture #1. Now that I have passed my General, I want to get on HF. To get started I decided to revamp my ham shack, and Jeff, WB2ZBN asked me to write an article about it for CrossTalk.

My near-term plans involve getting digital stuff working and trying out different logging software until I find one that I like. I have Windows 10 running in Parallels Desktop on my Mac to do digital modes. I am looking for suggestions on HF antennas and what equipment I should add to my shack. My house sits on a 1.5+ acre lot so I should have plenty of room for HF antennas.

Now that I have shown my Shack, I want to see other members share their shacks so I can get some ideas and inspiration.

I got my ART-13 transmitter working finally, this dates from WWII, and I had my first AM QSO with it. I have been working on this for over a year!
73
Jeff Welsh, KD2AZI 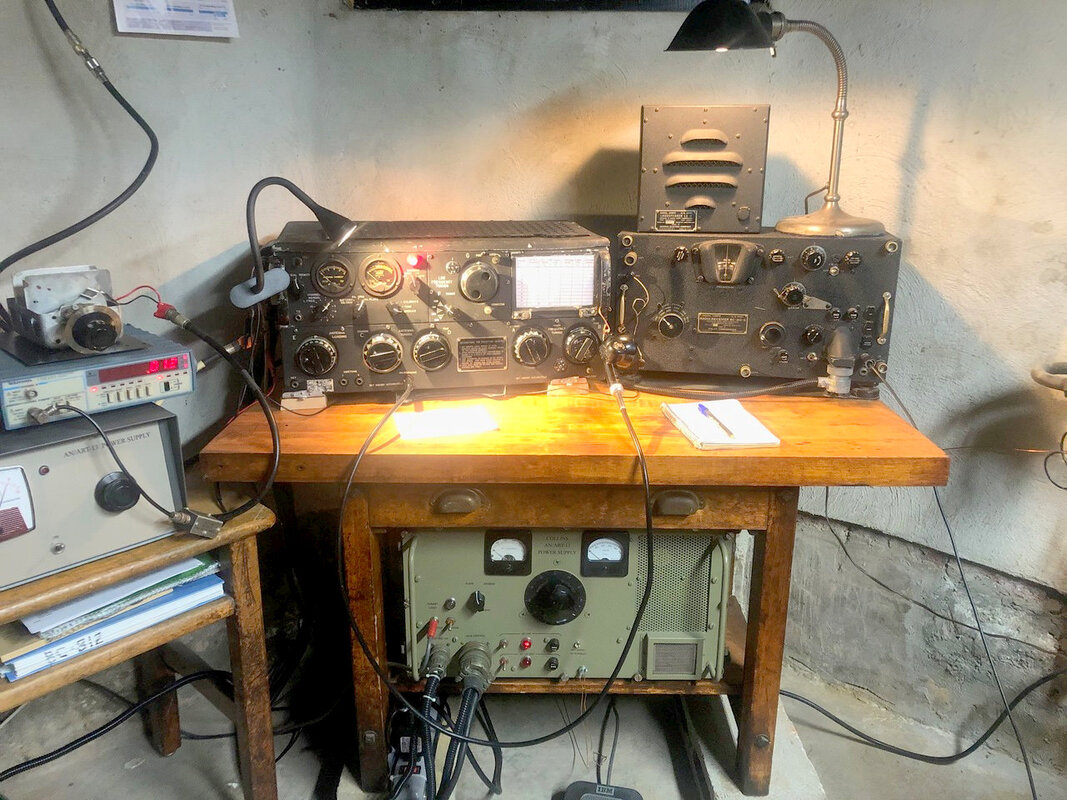 ​I was first licensed in late 1963 with a novice call, WN2JTR. Transmitter was a homebrew which GCARC member Gurdon Cooper, W2PAX, helped me build. Receiver was Hallicrafters SX-96 which I paid $125 for. At the time it was a boatload of money earned from mowing lawns at $2 each and selling snow cones for $1/hour.

By the way, I was able to contact the guy with whom I had my first QSO and get a copy of the QSL I sent him. 55 years later, I found my rough-looking original homebrew transmitter in the attic. See pictures below.

Interest in ham radio was diverted to young women and college studies after the novice license expired in 1964. I later earned a general license in 1980, but had a growing family which prevented me from dedicating a lot of time to ham radio.

After Y2K, I was able to pursue the hobby more fully. Building QRP kits became a favorite. I also joined FISTS in hopes of improving CW skills. Fast forward 15 or so years and digital modes found their way into the shack. PSK-31 for a while and for the past year, FT8.

The lead photo is of today's shack showing computers used for logging and HF digital operations. I was introduced to ham radio in outer space on the weekend of February 16, downloading SSTV images. In addition, there is the FT70DR HT from which I am learning a little more about VHF/UHF fun. This hobby is filled with opportunities to explore, learn  and just have fun. I wonder what's around the corner.
​ 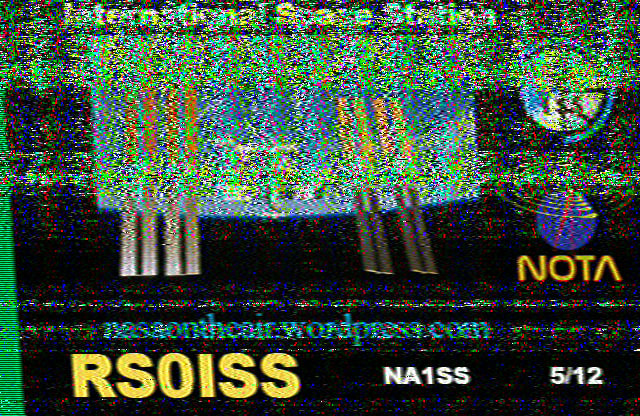 ​My shack is located in a small upstairs bedroom in my split level home. My primary radio is a Kenwood TS-590sg, powered by an Alinco MV-330 power supply, and driving an ACOM 1000 manual-tune amplifier. My primary antenna tuner is a Drake MN-2000. I use a Heil Pro Set headset most of the time, which has an HC6 mic element. For CW I have 50 year old Vibroplex single lever paddle. I also have a WinKeyer USB electronic keyer which is connected to my shack computer for CW contests when the computer will be generating the CW messages. The computer is a Dell Latitude E6410 laptop with an external 24 inch monitor. I also have a small dual band VHF/UHF FM radio, a Kenwood TM-251, that I monitor from time to time, mostly on 146.52 simplex.

The antenna farm consists of a Mosley Classic 33 tri-bander on 39 feet of Rohn 25g, dual band dipole for 80 and 40 meters, and a heavily modified Hustler 5BTV which is currently being used for 160m and 30m ( I told you it was heavily modified, HI HI ). A Cushcraft Ringo Ranger sits above the tri-bander on a short mast for 2m FM, and I have a Solarcon MAX-2000 vertical for 10m on top of my garage, just 15 feet above ground.

I have been back on the air just since January of 2016, after many years being QRT. I am primarily interested in HF contesting on SSB and CW, with some DX chasing as a side activity. Hope to hear you on the bands soon! 73 - Tony, K3TS.

What am I doing in the shack?

My first interest was vintage radio and I do quite a bit of repair. My daily driver is a Swan 500c with a Gap Titan DX vertical due to space constraints. I operate mostly on 20 Meters and enjoy DXing and plain-ol' rag-chewing. Recently I paired up a Yaesu FL-2100B amplifier that I purchased from Club member Lee Marino, N2LAM.

Since joining the Club, I've been exposed to several new modes, and recently purchased a starter HT, the Yaesu FT-4x. I'm having a fun time operating on 2M and 70cm repeaters. I hike quite frequently and I'm excited about the prospect of using the HT from mountain tops. I live in Haddonfield, and can hit the Club 2 Meter repeater if I hook up the HT to a 3 element Yagi, and point it south. I'm now planning to build a 2M J-Pole, and would like to get a 2M radio with a bit more power.

Although I have plans for several vintage-tech operating positions, I'm excited to get current with technology. Club members have demonstrated new Yaesu equipment, satellite operating, as well as software defined radio systems, and I'm looking for a chance to upgrade. I'm glad to be a Club member! If you need vintage parts, or are selling newer equipment slightly used please reach out to me.
​
Curt Myers, WA2JSG

Just a little about me in the shack.

I spend my radio time mostly on straight key CW, usually with the Straight Key Century Club (SKCC) and the North American QRP CW Club (NAQCC), and occasionally (when I remember) the Flying Pigs QRP Club Intl' (W8PIG) CW sprints. I also spend a little time on the low end of 10 Meters (now that there have been some good openings) using either CW or FT8, looking for Ten Ten numbers. Once in a great while I may get on PSK31 with the folks at the PODXS 070 Club. I am also a NJ Army MARS member (Army Vet myself) and get on their hour nets almost each morning (7am).

As far as the amateur bands are concerned, I rarely use voice communications (so don't be looking for me there hi hi) with the exception of the VHF and UHF Sunday evening Salem County RACES/ARES nets (analog FM and C4FM). My radios include a TS-590SG and ICOMs IC-703, 7000, and 7200. My HF antenna is just a plain 30-yr old Butternut HF-6V vertical (it was originally a HF-9V but had to downgrade it due to expensive capacitor problems), and it's completely resonant on the low end of the bands it's designed for (took a lot of time and effort to accomplish that). The only time I need to use the Palstar tuner is when I venture up into the voice sections (rarely) or when I am on the odd-ball (hi hi) MARS frequencies.

That's it! I have a couple pictures on my QRZ page and more pictures on : https://www.flickr.com/people/wa2jsg