​This PDF has a map on where to park and other pertinent information
​
​RCA_Museum_Field_Day.PDF​
All participants must meet at Rowan University.
DO NOT go to the Clubhouse.

Tech Saturday sessions are held at the W2MMD Clubhouse on the first Saturday of the month following the Wednesday Night General Membership Meeting and are designed to be hands-on collaborative events focused on using the Clubhouse resources to demonstrate various aspects of Amateur Radio and related technical areas. Previous sessions have covered USB software-defined radios, Raspberry Pi and Arduino devices, satellite operations and other similar topics.

​We would like to invite all of our new members as well as our veteran members to our Tech Saturday Forums to help answer any questions and discuss any and all issues the new members have come across as they progress through the Amateur Radio Experience.

The Discussion Theme is a QSO starting point - a way to initiate a conversation. All Tech Saturdays are an open QSO of all subjects of Amateur Radio interest.

All questions are welcome as well as a venue for hams to show off their latest ham radio projects or gadgets. Have a problem programming that HT, we can help! Not sure what radio or antenna to buy, we can help!

All Club Members who would like Clubhouse access to use its radio equipment would have to have some brief “Elmering” on the Clubhouse rules, such as using the alarm system, the A/C and heaters, the antenna system, and the radio equipment.

All Club Members who would like Clubhouse access to use its radio equipment would have to have some brief “Elmering” on the Clubhouse rules, such as using the alarm system, the A/C and heaters, the antenna system, and the radio equipment. All are welcome - Hams and Non-Hams - Club Members and Non-Club Members.
NanoVNA Tech Saturday was a Success
By Jon Pearce, WB2MNF

More than 15 hams attended the NanoVNA Workshop at the Tech Saturday event at the W2MMD Clubhouse on August 6, 2022. Many of the attendees had already purchased and worked with those devices; others were in their early stages of learning and were able to pick up some ideas and tips. Chris AD2CS and Jon WB2MNF reviewed the basic function and setup of the devices and then started working through some antenna measurements. They showed how to trim a 70 cm antenna to frequency using the VNA to continually measure the SWR at the desired frequency as the antenna was shortened, and then evaluated several other types of antennas including the 2 meter vertical that Charlie Olinda, N2SRQ had brought. A collaborative effort among the attendees was successful in using the VNA to measure the length of an “unknown” piece of coax, and then the group reviewed the effect of various circuits on a “demo” board built to show off how various electrical circuits can be viewed on these devices. Finally Chris demonstrated the VNA Saver program that runs on a PC connected to the VNA and displays the VNA output on a larger screen.
Tech Saturday sessions are held at the W2MMD Clubhouse on the first Saturday of the month following the Wednesday Night General Membership Meeting and are designed to be hands-on collaborative events focused on using the Clubhouse resources to demonstrate various aspects of Amateur Radio and related technical areas. Previous sessions have covered USB software-defined radios, Raspberry Pi and Arduino devices, satellite operations and other similar topics.

The September Tech Saturday event will be held on September 10, 2022 (the day before the GCARC Hamfest) and will cover implementing VARA-FM and packet radio in Winlink and other applications on 2 meters.
Satellite/VHF Room Grounding Project - April 9, 2022

We had some pretty heavy turnout for the April 9, 2022 Tech Saturday Forum. While no specific program was offered, we none the less brought out the membership to see first-hand the work being done in the Satellite/VHF room at the west end of the building.​

Sheldon Parker K2MEN took advantage of the fair weather to weed-whack around the building. A big THANK YOU to him for that!

​Bill Mollenhauer N2FZ came in as a guest of Jerry Milden K2OOO, and dropped off his membership application while he was there! 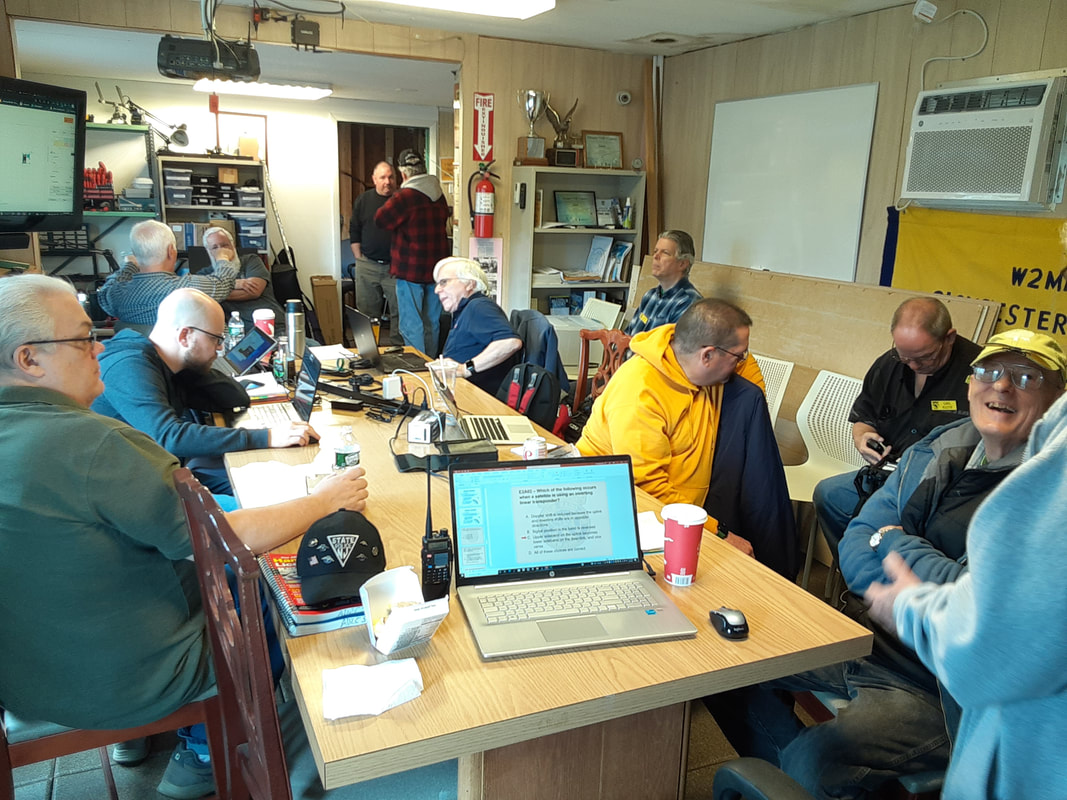 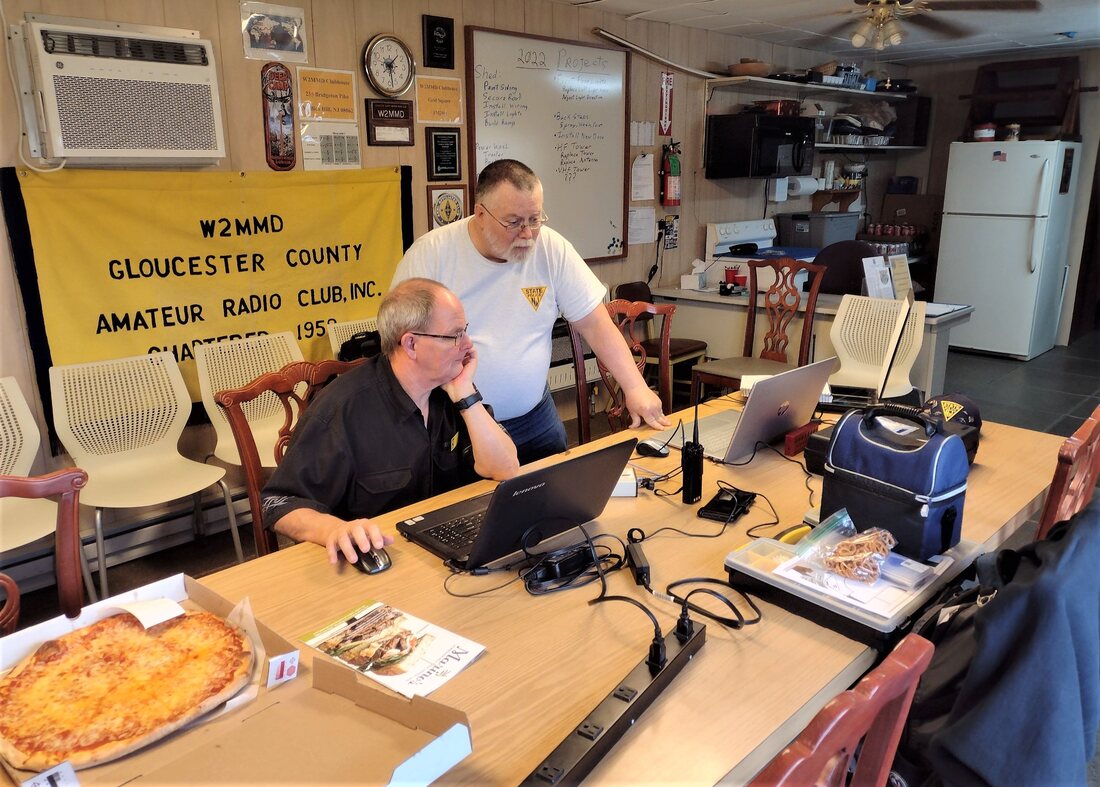 AD2CS & KD2YIF - Seen at the January 8, 2022 Tech Saturday - Members helping other members at the Clubhouse.
Tech Saturday Is For You!
By Jon Pearce, WB2MNF

The GCARC Tech Saturday event occurs on the first Saturday following the first Wednesday (the day of the GCARC General Membership Meeting) every month. Its purpose is to provide a forum for hams to discuss technical issues with other hams and to teach and learn about ham radio. It also provides the opportunity for GCARC members to become familiar with the many resources available at the Clubhouse and to get credentialed to gain entry to the Clubhouse and use those resources.

The November Tech Saturday event was a great success in achieving those goals with more than a dozen GCARC members attended at various times. Small groups worked together to program Baofeng and DMR radios or to figure out the best implementation of FT8. John Hill, W2HUV, showed off the HF station and described its remote operation, and several visitors got to work some great satellite passes and see some of the SkunkWorks resources in the VHF room. There was no discussion of personal medical ailments or expositions by the Heroes of Yesteryear about their accomplishments during the Eisenhower administration that have occasionally occurred in the past - instead it was lots of hams helping hams with technical issues.

The Clubhouse provides a great venue for these meetings, having a wealth of table space with seating and electrical outlets along with test equipment, power supplies and various antenna options. It appeared that many of the discussions were impromptu, although a few attendees had previously arranged to meet to work on specific issues. Even if there’s no planned program (as there wasn’t at this meeting) there was still plenty to do. And if you have a specific issue to discuss bring it along and someone will be there to help.

The next Tech Saturday Forum will be on December 4, 2021. The Clubhouse opens at 9:00am although many arrive somewhat later in the morning. Come on out, bring your questions or expertise and have an interesting morning. 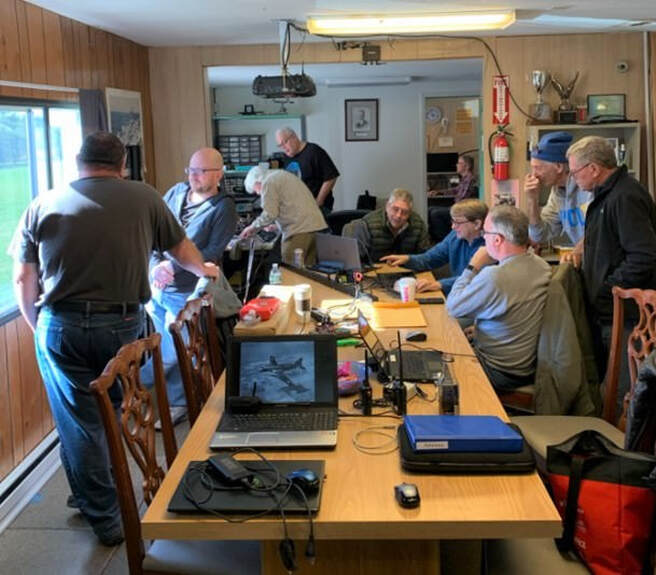 Virtual Audio Cable : https://vac.muzychenko.net/en/index.htm : This is needed for all of the other programs. There are other similar programs, but this is the one that we know.

Article on decoding NOAA satellite images using only the RTL-SDR radio and the cheap rabbit-ears dipole in the kit that we recommended. They use different software for the SDR radio and VAC, but the WxToImg program is the same. If you have that kit it’s certainly worth a try. NOAA passes vary in their elevation and consequent signal strength, but the occasional overhead pass can be very clear. Here’s the link : https://hackernoon.com/weather-sat-9620228789c8

John K2QA has set up a page on the Skunkworks website with the handouts and presentations from the January and February Tech Saturday sessions : http://skunkworks.w2mmd.org/tech_Saturday 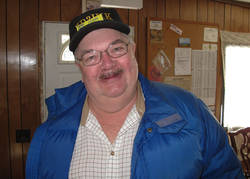 Frank Bratton, KD2HIK
Tech Saturday Forum continues to be a big hit out at our new W2MMD Clubhouse.  On the first Saturday after the general membership meeting for March 4, 2015, we had a number of people come out and stop by, at least for a little while, in spite of the cold weather and snow still covering the grounds. 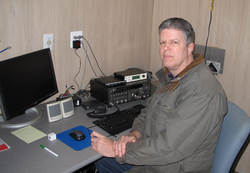 In the VHF/UHF room, Al was hunting amateur radio satellites using computer control of the clubhouse’s alt/az antenna, clearly locking in on some voices from one bird during a favorable pass.  Maybe next time he’ll make a 2-way contact.  Stop on by April 4 to find out!
At the other end of the Clubhouse, in the HF room, the 10 meter band was found to be hopping with lots of stations from Europe in a contest able to be heard. Some of our ‘new to HF’ members got a chance to log some of their first trans-Atlantic radio contacts, with a little help from their fellow Club members. Were you one of them? It’s amazing what one can do with less than 100 Watts. What a great experience!

Even when not behind the microphone, we had fun trying to pick out the callsigns from the sideband signals we were hearing, and looking them up via QRZ.com on our cellphones. Care to give it a try? Thank you again Al for that Wi-Fi, and the internet extension out at the clubhouse. It sure comes in handy! 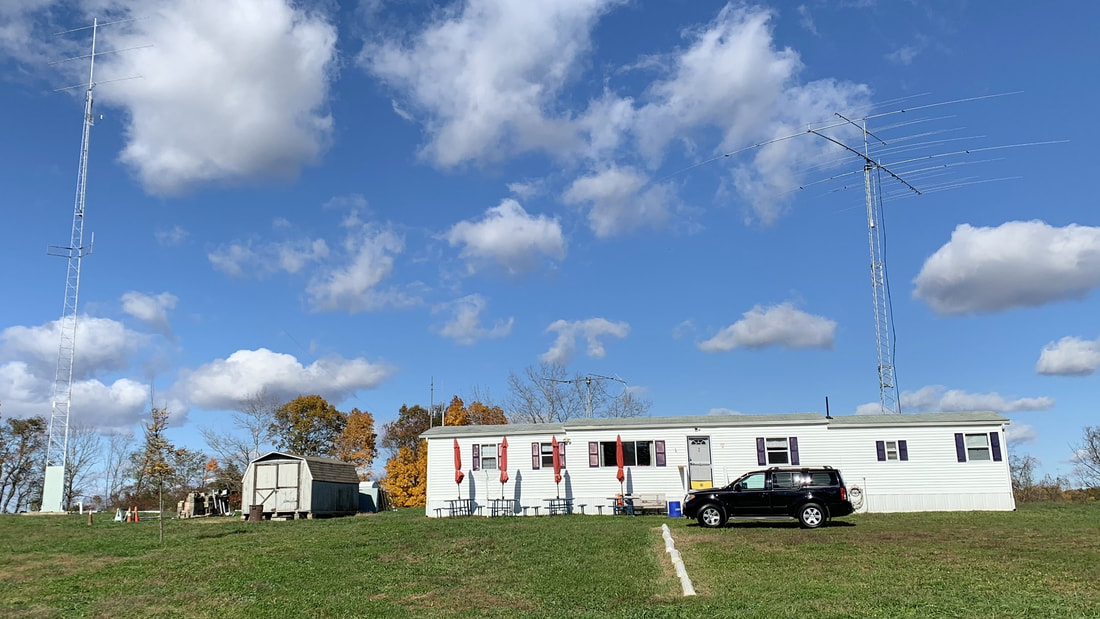 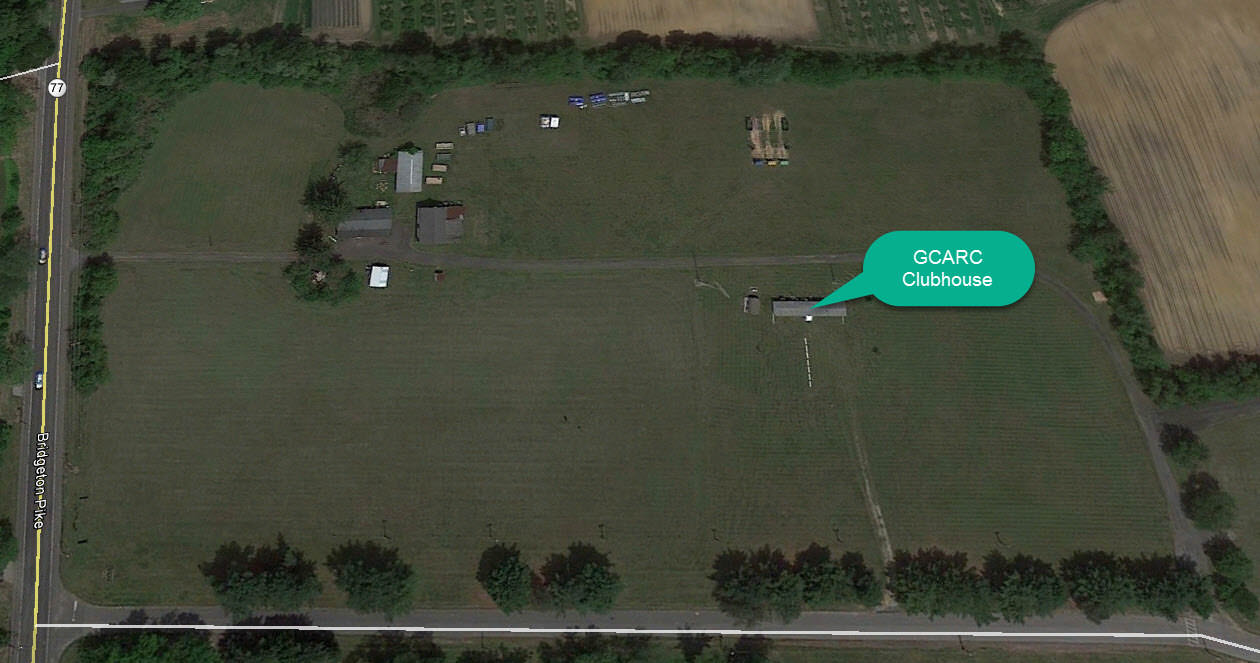 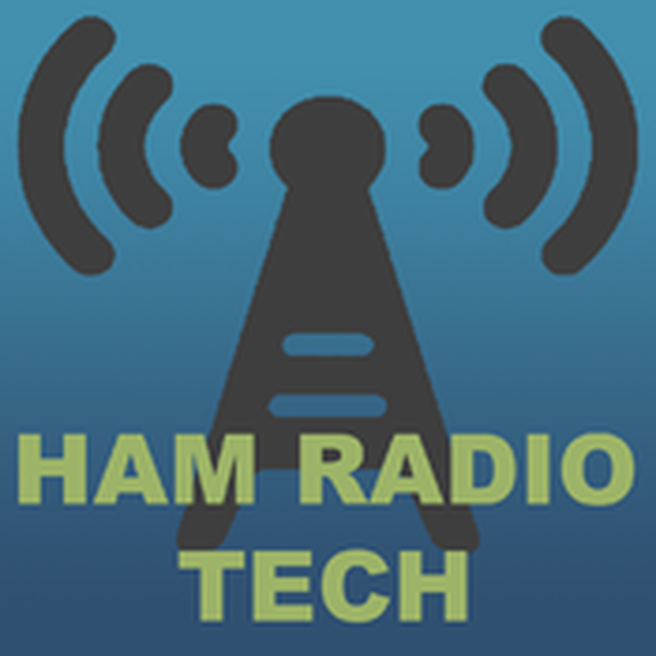