At The Repair Bench 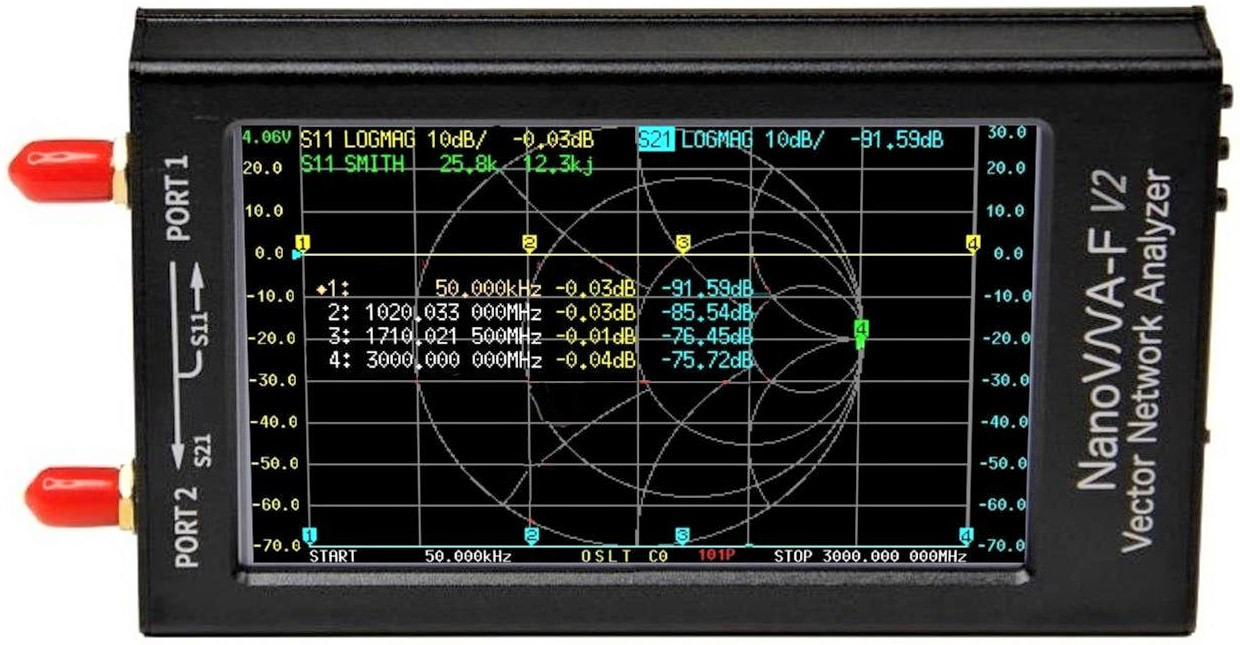 Fairly recently, another member – Rich Subers W2RHS – and I entered into a complex trade agreement wherein he would give me an unbuilt MFJ antenna tuner kit for me to build, and in exchange, I would replace his failed NanoVNA with a new and slightly larger one. Rich threw in the failed NanoVNA, so I figured I would give it a try to see if I could repair it.

This particular NanoVNA is encased in a multi-piece 3-D printed plastic enclosure, which does a good job of protecting the unit. It would also serve to keep things in place post-repair. Rich had told me that the unit worked, even though there was no display on the screen, as he could connect it to his phone or PC and use the functions of the NanoVNA with no trouble via the software. I suspected that the problem was in the display backlight wiring.

We were fairly sure that the problem was a bad solder joint underneath the display, which was attached to the main PCB with some strong adhesive. The first question was whether or not I could successfully separate the display and the main board. I tried using some monofilament line to cut the adhesive, but the line kept breaking, Ultimately, I tried using some AWG24 solid copper wire, which did the trick nicely.

Once I had the unit open, I powered it up and starting putting localized pressure on the end of the Kapton cable that connects the display to the main board. There are about twenty individual connections carried in that cable, so I had to determine which ones were faulty. It soon became evident that there were multiple joints open, as pressing on various connections would illuminate different LED’s in the four-LED backlight system.

These wire connections are on a pitch or spacing of about 0.050”, so I chose NOT to attack this job with a soldering iron. Instead, I fired up my hot air reflow gun and heated the area with the hot air while placing light pressure across the entire Kapton cable end. This approach was quite successful, restoring the unit backlight to full operation. The best part was that no undue damage was done to the Kapton cable, and I did not have to worry about solder bridges.

I flipped the display back in place, where the original adhesive bonded back together and held the display tightly. I then reassembled the plastic enclosure and the job was complete. Just for fun, I tried a calibration and then swept some coax, some lamp cord, and a couple of antennas. All worked as it should.

Because Rich had a new unit and did not want this one back, I casually offered it to the first taker on a Tuesday Noonday Net, and it was gone inside of five minutes. Now, another member, Anthony Cerami N2OAC, is the proud owner of a resurrected NanoVNA.
with an SO-239 connector on each of five of the sides, and a ground post on the sixth side. The way the unit is designed, when a given position is selected, all of the other positions’ connectors are grounded. The connectors are labeled “1” through “4”, “C”, and “G”. The internal switching mechanism has no physical stop, which means that it can be rotated a full 360° if so desired.

The complaint was that positions “3” and “4” were defunct, with no connection to the common connector or to ground when selected. At first, it seemed like a straight-forward open circuit problem, such as a broken solder joint at each of the non-working connectors. Close examination, however, showed that all of the solder joints were intact. On the off chance that there were hidden defects there, I went ahead and reflowed the solder on all of the connectors, but to no avail. The problem still existed.

I decided that the problem had to be inside the switch itself, so I disassembled the unit, de-soldering all of the connectors from the switch. The switch is a double-sided rotary switch on a ceramic substrate, with a contact disc on either side of the ceramic base, and a fixed brush at each of the connector positions. In its assembled condition, only the ground side of the switch substrate or base is visible; the detent plate at the top conceals the upper active connection disc and brushes.

This meant that I would need to disassemble the switch to get at the upper contact disc. No problem — it is held together by a pair of machine screws with spacers, washers, and nuts. Once the switch was apart, I began to investigate just why there was no continuity at those two switch positions. What I found was a bit of a surprise. The whole problem was a heavy build-up of oxidation on the brush contacts at those two positions. The fix was fairly simple - some cotton swabs, a toothbrush, and some DeoxIT® Gold. Twenty minutes of cleaning on both sides of the ceramic disc, and the switch contacts were operational again. Another ten minutes, and the switch was reassembled and ready to go back into the unit, with a fresh application of DeoxIT® X10S on the shaft and bushing to aid in long-life operation.

I cleaned up all of the parts, including wire-brushing the threads on the SO-239 connectors. Then I re-assembled the entire unit, and soldered the connectors to the switch terminals. Testing with an ohmmeter showed good clean continuity and zero resistance through all positions of the switch. Passing 30 VDC through the switch from common to each output in turn showed zero voltage drop internally in the switch.

So what happened here? Why did only two of the switch positions have this heavy oxidation? As it turns out, the owner has had this switch in service for over thirty-five years, but he has never used anything but switch positions “1” and “2”, and never turned the switch all of the way around the dial - he simply switched it back and forth between the two positions he used. This led to a lack of “scrubbing” at the unused positions, and age and time took over from there.

Moral of the story? Sometimes, it pays to take the long way around. Exercising the switch through its entire range of travel from time to time will help to keep the contacts clean and oxidation free, allowing the switch to perform up to it design specifications. See you next month!