We’re going to start the year with another “un-program”, allowing everyone to seek out some answers to your questions and get to know each other a bit better.

There may just be a last-minute surprise in store for us, with something very new and highly anticipated to see.  More details as things develop, so stay tuned!

No matter what is happening on January 7th, we’ll have the ability to compare some digital radios and modes, plus our welcome refreshments.

As to the rest of the year, I asked what everyone would like to see in the coming year.  A handful of you gave me some excellent ideas, so we’re working out the schedule. Some of them – such as how to program your new radio -  were more suited for K2ZA’s Tech Saturday Forum, so there will be a schedule of those, as well. On deck for February, we’ll have a visit from Thomas “Skip” Arey, N2EI, our new Section Manager. In April, John Dilks, K2TQN, will entertain us with a sense of radio history. June offers our summer Pizza Party (boy could I use some summer right now) with some surprises in store throughout the year. It looks like 2015 will be another great year for our club!

We’re going to start the year with another “un-program”, allowing everyone to seek out some answers to your questions and get to know each other a bit better.

There may just be a last-minute surprise in store for us, with something very new and highly anticipated to see.  More details as things develop, so stay tuned!

No matter what is happening on January 7th, we’ll have the ability to compare some digital radios and modes, plus our welcome refreshments.

his month, John Zaruba, K2ZA, Bob Saunders, KC2UYS, and Cory Sickles, WA3UVV, will be conducting an unveiling of sorts – with one of the Communications Pods we designed and had built – using grant funds made available to us through our close relationship with the New Jersey - South Region – Healthcare Emergency Preparedness Coalition.

The CommPods are essentially a deconstructed communications trailer – which removes all of the downside elements (registration, insurance, inspection, heavy-duty towing vehicle requirement, etc) and retains the core elements that we want and need. Each CommPod is small enough to fit through an ADA doorway, into a helicopter or passenger rail car and be towed by any vehicle with a class 3 trailer hitch.

The first three have high-current, deep-cycle batteries installed and solar panels are included. Also, HF through SHF capabilities were designed in – for analog and digital voice, plus high-speed data transmissions. They’ll be valuable assets for public service events like the MS-150, Tour de Pitman and Field Day – plus demonstration opportunities.

Please attend the March meeting to see what is “under the hood” and share an invitation with anyone you know that’s interested in EMCOMM work and promoting the positive value of amateur radio for public service.
​
The Pod was built by Rescue 42 Innovative Fire-Rescue Products - www.rescue42.com

Has Spring Sprung? Asked as a question, but we know the answer. If not yes now, then soon! Call a friend, hop in a car, and get out of the house for some Radiosport adventure, Saturday morning March 7! Why? Because it is the “Has Spring Sprung?” fox hunt #7! 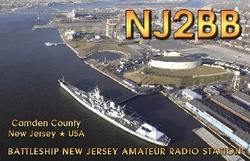 As mentioned in March’s Crosstalk, and at our March club meeting, Battleship Radio Club president Harry Bryant, AA2WN, has graciously invited interested GCARC club members the opportunity to be guest radio operators on board the museum ship Battleship New Jersey, from noon to about 3:30pm on Sunday afternoon, April 26!  But it is a by-invitation event.  He needs to know specifically how many people he’ll be escorting on board from the Camden waterfront pier.  As of the date of this writing, we have 8 people signed up: me, Jerry WB2QEF, Frank KD2HIK, Milt K2MXF, Chuck KD2EIB, Dan N2TXG, Brian & Matt KD2HVJ.  There are multiple operating positions in the radio room, but space is limited, so we will be taking turns on the microphones. If you are interested in participating in this by-invitation event, and have not signed up already, you can email me direct with your interest, or sign up with our club Vice President, Cory WA3UVV at the April 1 club meeting, and he will forward your name to me.

On Thursday April 30, members of the Gloucester County ARC hosted a field trip for a local Cub Scout Webelos Den 244 (4th grade boys) from Harrison Township, and their parents, to tour our radio Clubhouse, and to get an overview of Ham radio at the same time. After being cooped up in the school library all winter, the scouts (and their leader), were excited for an opportunity to get out and experience something different. Combined, there were about a dozen scouts, siblings, and parents in attendance.

We started with a brief introduction and slideshow in our main room, progressed into showing some DIY items (including a soldering iron - which was new to them, a "tuna can" transmitter, a fox transmitter and directional antenna, and some other things. We then passed around some colorful QSL cards and had them use a globe to try and find where some of the places the cards were from. We went on a tour of the station, including the UHF/VHF and HF communications rooms, performed an interactive Morse Code activity, and then each got a chance to talk live on the air over radio, using the site's 2 Meter station, with another club member via our repeater in Pitman, New Jersey. The parents had a good time too, listening in on HT's we had tuned in for them while their kids took turns at the site's 2 Meter station. They've all been invited back to visit us during Field Day, when the Boy Scouts from Troop 9 will be running a GOTA (Get-On-The-Air) station and camping out with us.

Special thanks go out to all club members who helped me with this event, and to Webelos Den leader (and recently licensed ham) Kevin. KD2IGU, for suggesting the idea and for coordinating with his scouts and their parents. 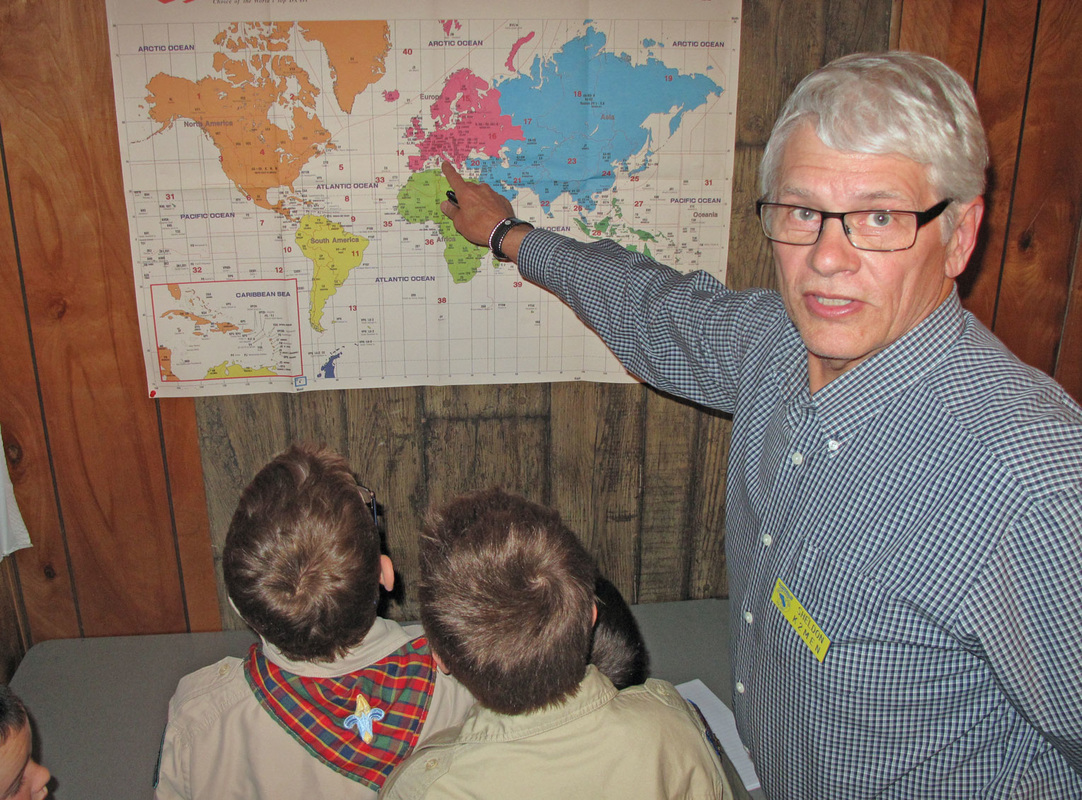 From Wikipedia, the free encyclopedia http://en.wikipedia.org/wiki/Joseph_Hooton_Taylor,_Jr.

"Joe Taylor first obtained his amateur radio license as a teenager, which led him to the field of radio astronomy. Taylor is well known in the field of amateur radio weak signal communication and was assigned the call sign K1JT by the Federal Communications Commission (FCC). He had previously held the callsigns K2ITP, WA1LXQ, W1HFV, and VK2BJX (the latter in Australia). His Amateur Radio feats have included mounting an 'expedition' in April 2010 to use the Arecibo Radio Telescope to conduct moonbounce with Amateurs around the world using voice, Morse Code, and digital communications."

"He wrote several computer programs and communications protocols, including WSJT ("Weak Signal/Joe Taylor"), a software package and protocol suite that utilizes computer-generated messages in conjunction with radio transceivers to communicate over long distances with other amateur radio operators. WSJT is useful for passing short messages via non-traditional radio communications methods, such as moonbounce and meteor scatter and other low signal-to-noise ratio paths. It is also useful for extremely long-distance contacts using very low power transmissions."

As a show of support to our local veterans, and a sign of respect for those who have sacrificed so much in defense of our country and the freedoms we enjoy as Americans, GCARC members and a non-member marched in the Monroe Township 2015 Memorial Day Parade. Club member Dave MacDonald, WB3JOY, had graciously volunteered to be the organizer for our club's participation in this event.

A recap of Field Day, our biggest emergency preparedness exercise (and contest) will be presented with stats, stories and pictures. If you haven’t signed up for this fun-filled weekend, there’s still time to get involved – even if you can only participate for a few hours.

A presentation on what DMR (Digital Mobile Radio) is , how TDMA (Time Division Multiple Access) works, and why DMR is better than D-STAR or Yaesu System Fusion.

September 2, 2015 - General Membership Meeting
Get To Know Your Fellow Hams

We will have another “un-program”, allowing everyone to seek out some answers to your questions and get to know each other a bit better.

A recap of the very busy month of September. Starting with our Hamfest, the Pope's Philadelphia area visit, and the MS150 Bike - City to Shore Event on October 3 and 4, 2015.

November 4, 2015 - General Membership Meeting
Free Antenna Modeling - What can it do for me?

Part of the fun of being a licensed amateur radio operator is that we get to tinker with stuff. And one of the easiest things to tinker with is home built antennas, particularly wire antennas. They are cheap to build and can be great performers. But wouldn’t it be nice if you could try out a couple of antenna choices in the comfort of your own home, before going outside and building one and then seeing if it would work, and then all the tinkering time using trial and error to figure out how to make it better? Well, turns out you can! And the 4nec2 software to help you do it is FREE!  http://www.qsl.net/4nec2/

Now all you need is someone to show you how to use that software. Well, you are in luck! That is what we have in store for you at the November 4 Club Meeting! Take a look at some of the wire antennas your fellow club members have made for field day, as examples. What’s your next field day antenna going to be? With 4nec2 software, and lessons learned at the Club Meeting on November 4, you’ll be on your way to finding out!

Hope to see you there!

Thanks to all who suggested topics for our meetings – many of which are being addressed with the Tech Saturday Forums.

We’ve invited members of other area clubs to attend many of these meetings and encourage you to invite some visitors – whether they’re already hams or have expressed some interest in Amateur Radio.