Back to The Elmer's Shack


The current Amateur Extra exam pool is good through June of 2020. What will be in the new question pool that will go into effect then? We’ll know a little later this year. Until then, one thing for sure is that the current question pool already recognizes that software defined radio technology (“SDR” for short), which is greatly improving the technical capabilities of the amateur radio equipment we use today, is something that we should become familiar with and know something about.

If you haven’t recently, and perhaps might want to before the question pool updates later this year, check out section E7F of the question pool, which includes software defined radio fundamentals.

Question E7F01 in the current pool asks the question, “What is meant my direct digital conversion as applied to software defined radio?” Did you know the answer? It is “C”, Incoming RF is digitized by an Analog to Digital converter without being mixed with a local oscillator signal.

So what’s the big deal about “SDR”, and why would I want to know anything about this, other than to pass a test?

How about the words “Simply astounding!” used by many hams after experiencing an SDR for the first time? I’ll let Claude Jollet, V32DPE, pick it up from here, and do the explaining for the interested reader in his excellent article at https://www.hamradiosecrets.com/ham-radio-receiver.html. 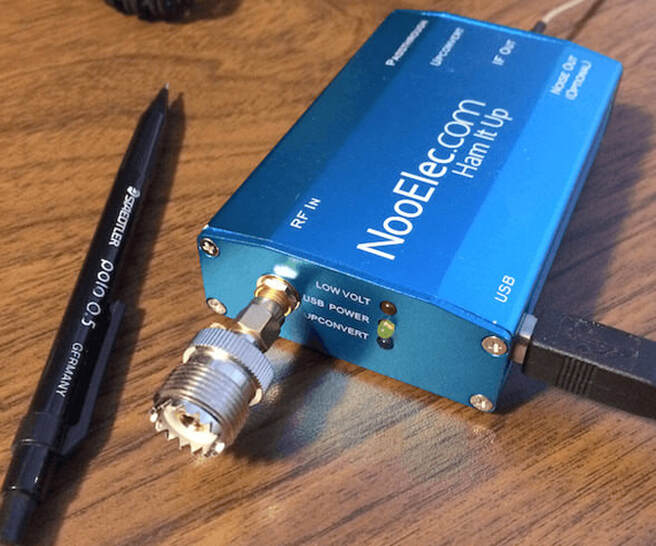 SDR Receiver (www.hamradiosecrets.com)
Is A NanoVNA On Your Holiday Wish-List?
By Jim Wright, N2GXJ

The Holidays are approaching! Have enough gizmos in your radio toolbox yet? Surely not! There has to be room next to your trusty digital volt-ohm meter for some RF measurement tools. How about an SWR meter? Do you have one of those? They’re really nice to check on your antenna systems. But most only cover HF. And then, there is the cost. Ones that cover higher bands, like 2 meters and 70cm, can be quite expensive, running into the upper hundreds of dollars. If all you want to do is see if the SWR on your car’s 2 meter mag mount antenna is any good, who wants to spend many hundreds of dollars just to find out? Isn’t there another option?

Yes there is! I’m talking about the NanoVNA, and its many variants. It’s a gizmo that is capable of SWR measurements, and much more. And a with prices under $100, with some as low as $60, you can feel less guilt about putting one on your holiday gift wish list! 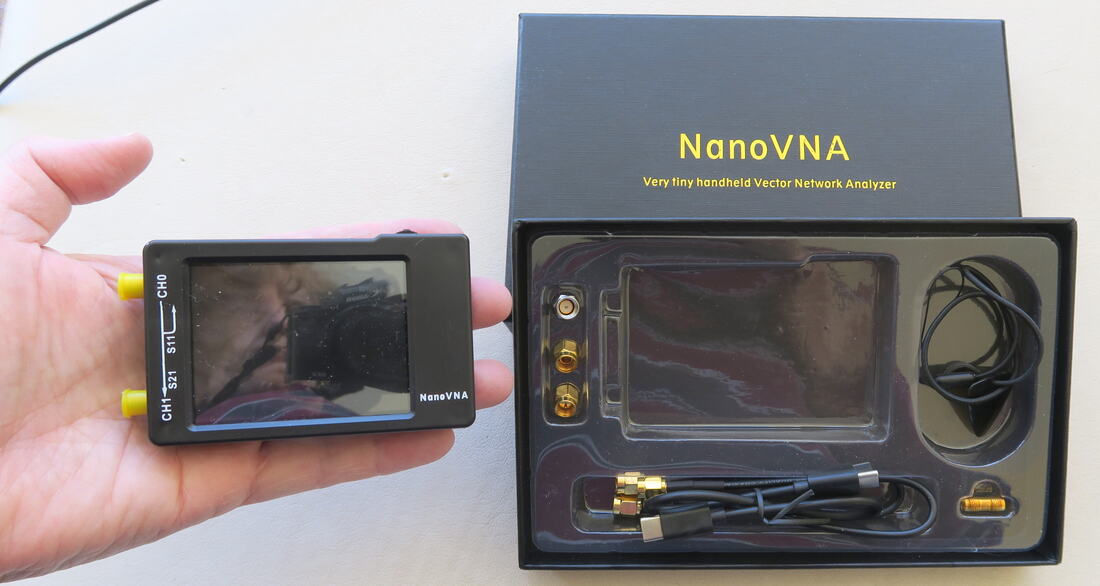 Not heard about this gismo? Well, now you have. It is a two port device, capable of all kinds of transmission and reflection measurements, including TDR cable fault analysis, but for now we’ll just focus on using port0, and getting SWR measurements. There are several manufacturers of these little gizmos, and they come in different revisions, with different features and frequency ranges supported. I chose a NanoVNA-H, HW version 3.4, with USB-C interface for charging the internal battery and connecting to a laptop computer. It also came with set of calibration connectors (more about that later). I used https://nanovna.com to research selections. There are other options.

First, a warning. This is a vector network analyzer (VNA), not an SWR meter. It is not “plug and play”. Like all VNA, it does come with a learning curve, and certain quirks. An example of such a quirk is that you need to attach and detach a series of short, open, and 50 ohm load connectors to the device as part of a calibration procedure each time you switch to a new range of frequencies to test with.

One of the advertised features is that it is very tiny and hand-held. That, it is. But that comes with compromises. For me, the back-lit display is not very bright and easily washes out in sunlight. Sure it is tiny and fits in your hand, but for me, I have trouble reading it. The font used for the display and the on-screen menu is so micro-tiny on the touch display, that I can barely read it even with reading glasses in a dark location.

I almost gave up on the device until I found a work-around, which was to use my laptop connected to the device, with a piece of software called “nanovna-saver-0.2.2” to control tests and display measurement results. That software saved the day. With it, I could now check on my home 2 meter/70 cm vertical antenna, the mag mount for my car, my portable Fox Hunt antenna, as well as work on new home-brew antenna projects, like one of those Lindenblad satellite antennas the “W2MMD SkunkWorks” crew have been producing.

To get an idea of the kind of data you can get from this gizmo, here are some examples, for a mag-mount, and for one of those Lindenblad. Think this is something you might like to put on your holiday wish list? Enjoy!
​ 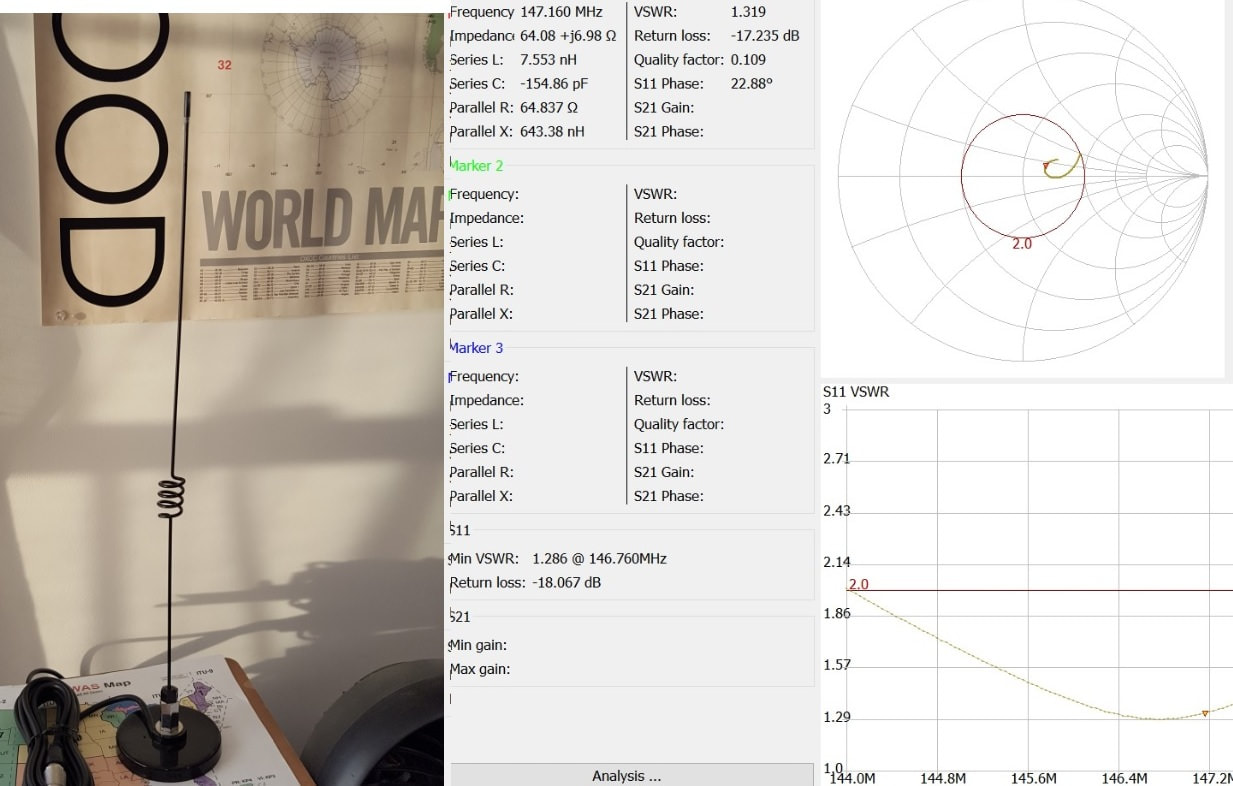