Back to Past Field Days

Well now that it is past, we can look back and laugh. I don't think I can remember any time that I was so hot, gad!, so much sunburn or so sandy. However, on the brighter side, I had a swell time and I am sure that all those who took part did likewise. With all the setting up to do, tents to go up, equipment to hook up, it seemed for awhile that it was just going to be too much, but with George Stuart, K2SOL’s guidance and direction, things finally got shaped up to the point where things looked like they were about set to go, at least all this work looked like it was going to pay off. George was sure hoping so anyway. To add to the problem it seemed as though there was an itinerant mocking bird that wanted to get into the act.

Transmitters were put on the air on 10, 20, 15, 40 and 80 Meters with beams on 10 and 2. A trap on 40 and 80 and a vertical, it looked like a real antenna farm up there on Woody’s hill HIHI! Fortunately there were no major difficulties that Jack and his crew of maintenance men couldn't handle and things were ready to roll on Saturday with a minimum of crosstalk between rigs. Novices were operating on 2 and on taking turns on 80 CW and I believe that we have quite a few good contest operators in the making.

I would like to mention the names of all those that took part in the operation, but I am afraid that some would be missed, so I think that it would better if we waited until the next issue to be sure that no one is slighted.

A lot was learned during that historic weekend. For instance...Jim Livezy, K2SJL, learned that you need gasoline to run the generator and also how to put the radiator cap back on. Charles Sketchley, K2PQD, found out that a tent can become a Turkish bath in the hot sun. And last but not least, George found out that you need a frying pan to fry eggs. Yours truly K2JKA, learned that too much sun can lead to misery. Publicity wise, we had a good picture on the cover of the Woodbury Daily Times. Thanks to the efforts of Jack Layton, K2JKA and Johnny Struckel of WKDN, a ten minute tape of the field day site operation was broadcast over their facilities the following Friday nite. The club owes a great debt of gratitude to all who took part in the effort.

Especially to George Stuart, K2SOL, for the wonderful job he did in coordinating things and running things so smoothly with a minimum of confusion. Well done, George.

To all the operators for their time, effort, and patience, you are to be congratulated on a good job.

To Dempsey’s Truck Service of Mantua for their kindness and co­operation.

To Bill Hopely's Mobil Service of Barnsboro for his generosity in hauling the generator to and from the site free of charge.

To Dink Wilkinson for the use of his truck over the weekend and any others that I may have missed, we want to express our sincere appreciation.

As I have it, we made 534 contacts and a score of about 3400. Not bad for a first try. George will have a report at our regular meeting. See you there! 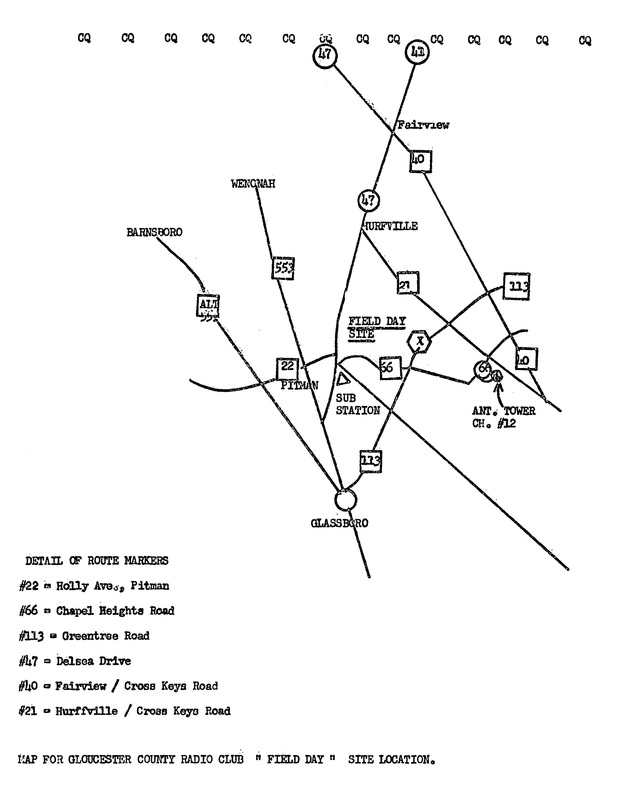 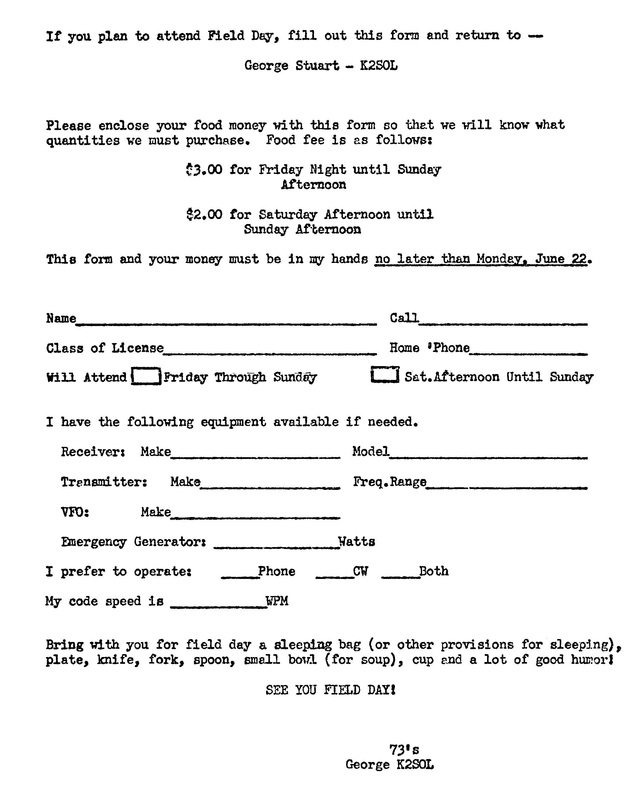