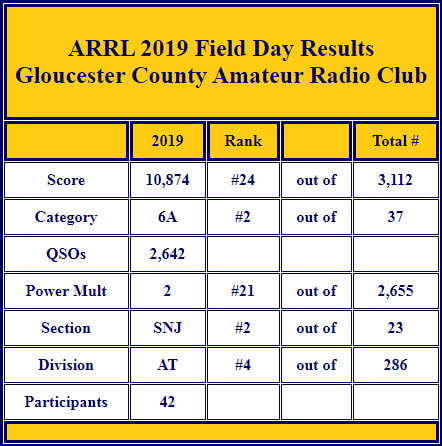 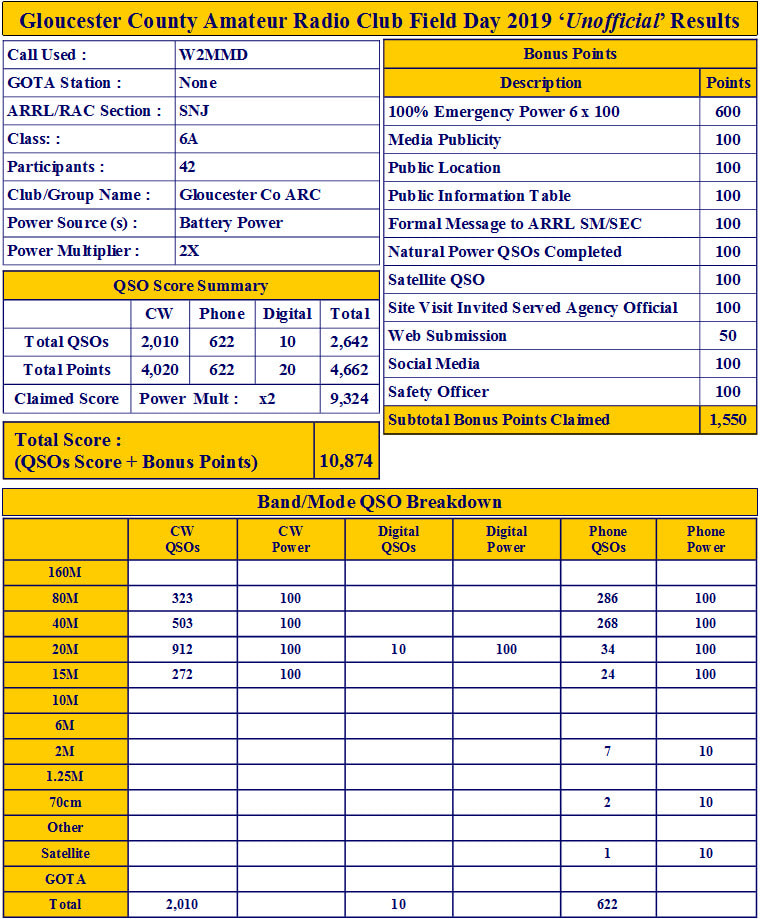 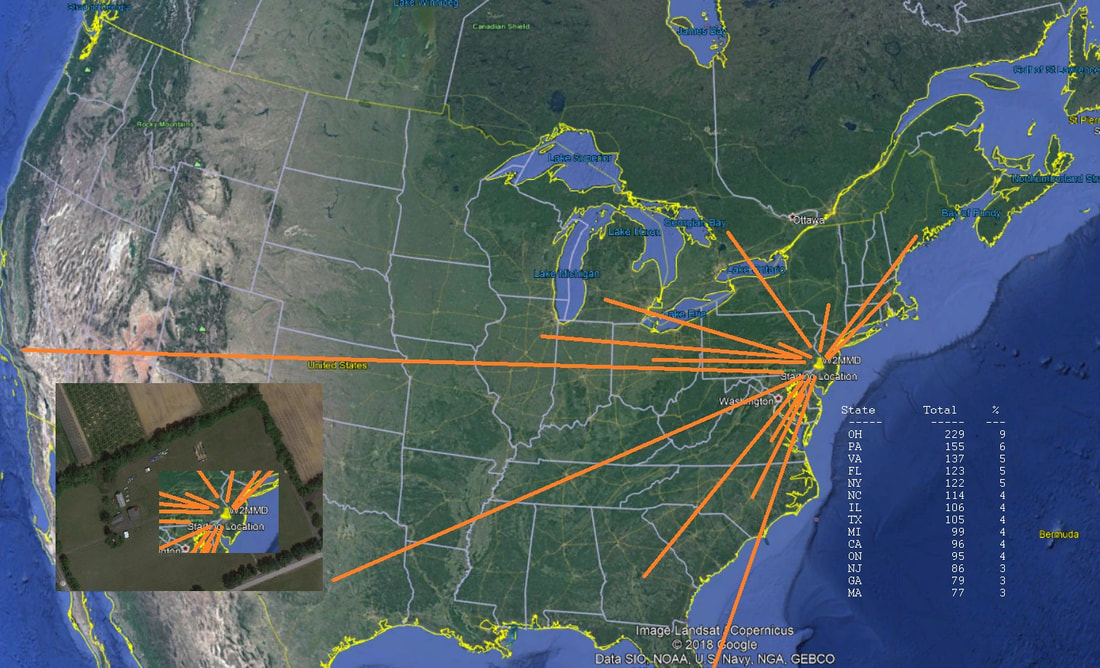 Field Day brings out the creativity in hams since we have to adapt our typical operating configurations and practices to a completely different setting. This was also true for the satellite team (K2QA, K2ZA, N3PUU, KD2RPE and WB2MNF) as we prepared for the 2019 event. Under Field Day rules stations receive 100 bonus points for the first satellite contact, so obtaining this contact is significant to our point score. Last year we barely made it - we made our first and only contact on the last satellite pass of the event, so this year we wanted to be far better prepared.

As in any ham station, there are three primary components - the receiver, the transmitter, and the antennas. For satellite receiving we long ago migrated to software defined radio, so I had to build out my laptop for SDR. This meant installing the PST Rotator program that manages the antennas and sets the frequencies on the radios, the SDR Console program for visualizing and listening to the downlink signal, the com0com program that will allow PST Rotator to talk to the transmitter, and several other programs. Last year we utilized my smaller Toshiba laptop but the screen was too small to see in bright sunlight so I had to do a new installation on my larger HP laptop with a 15 inch screen.

Last year we used my Yaesu 991A rig as a transmitter but found that the uplink signal on 435 MHz caused significant interference on the 2 Meter downlink, which is problematic because the operator needs to be able to hear his signal in the downlink in order to correct for Doppler shift. The 991A is apparently notorious for creating this interference, so we ended up using the ICOM 7100 in my car. Conveniently, that radio has a separate control head that connects to the main unit with a standard Ethernet cable, so we were able to use a 50 foot CAT 6 cable to place the control head on the picnic table with the car parked nearby. The 7100 also allows CAT frequency control, so we ran a 30 foot USB cable from the laptop to the main unit that allowed PST Rotator to correct the transmit frequency for Doppler shift.
​ 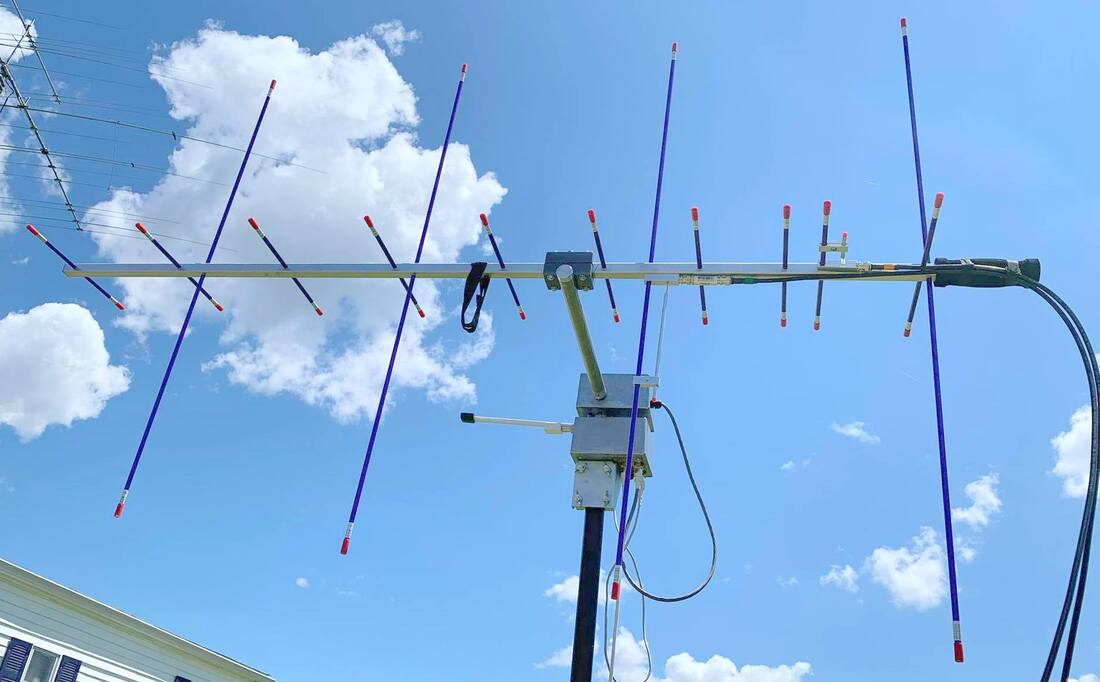 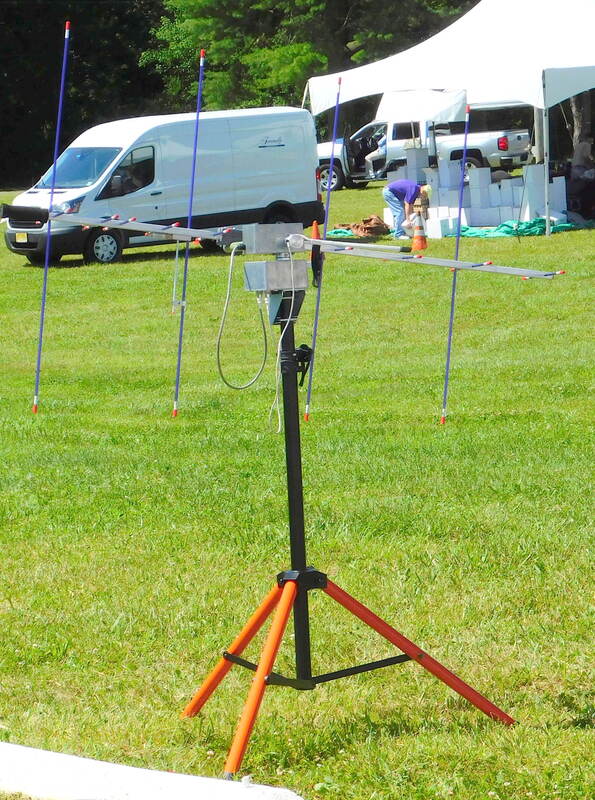 Last year we had to use the "Armstrong" method of antenna aiming, but this year K2QA had his Portable Rotation rotors working, which were connected to the laptop through a USB cable and allow PST Rotator to control the azimuth and elevation of the antennas. On the rotator we mounted an Arrow satellite antenna with a 2 Meter bandpass filter to further reduce interference on the downlink. See above pictures.

The team met at the Clubhouse a week before Field Day to try everything out, and with a few changes everything worked well. But that was during normal operations with a couple of operators on each satellite, not during Field Day during which dozens of operators were trying to make contacts. We had previously decided to forgo the FM satellites, since only one QSO can occur at a time, and instead focused on the SSB satellites that support multiple QSO's. This included the CAS and XW series of Chinese satellites. Unfortunately, most of the useful passes of these satellites occurred overnight, so we had effective operating window of between 4 PM and 7 PM on Saturday and 4 AM to 7 AM on Sunday. Obviously we hoped we would be successful on Saturday!

Satellite operation involves hours of waiting punctuated by minutes of frantic operating, so once we had the equipment set up we found other projects to fill the time before the first passes on Saturday afternoon. Unfortunately, we found the limits of the power budgets for these satellites when they’re heavily loaded with operators. Each satellite has a fixed power budget that gets divided among the number of simultaneous users. When there are only a couple of users each signal is quite loud, but with a dozen users signals often were unreadable. By about 9:30 PM on Saturday we still hadn’t made a contact after about 8 passes. The next pass would be at midnight, but there were several that would occur between 5 AM and 10 AM on Sunday, so we decided to quit and reconvene early on Sunday morning. We had to pack up equipment such as laptops and SDR radios, and obviously disconnect the ICOM from the antennas so I could drive home.

Most of the team showed up around 5 AM on Sunday, and we reconnected everything and waited for the first pass. We weren’t successful on that pass or several that followed, but we finally hit pay dirt about 6:30 AM with K4BFT (4A Alabama) on the XW-2B satellite. Apparently many operators had succeeded in getting their bonus point contact on Saturday or didn't feel like getting up early, so the satellite was lightly loaded when we were able to get the much-needed contact. After that we made a few unsuccessful tries, and the satellite passes ended at about 10 AM. We only made one contact, but that’s all we needed.

Overall we were satisfied with the current equipment configuration - we didn’t have any interference on the downlink and the PST Rotator program handled the rotator and Doppler shift well. Our only significant change in plans for next year is to add another Arrow antenna to increase receive gain. These Arrows only have four elements on 2 Meters, which doesn't appear to be enough to bring in weak signals during Field Day. Hopefully this will increase our opportunities for contacts next year.

The photo below shows the Field Day satellite station. On the table is a laptop and the control head for the 7100, with the SDR Play radio hidden by the laptop. The Portable Rotation rotator with the Arrow antenna is in the background, and the black coaxial cable and blue CAT 6 cable running to the 7100 base unit in my car are also visible. The T-shirt hanging from the umbrella is to block the sun in the early morning. 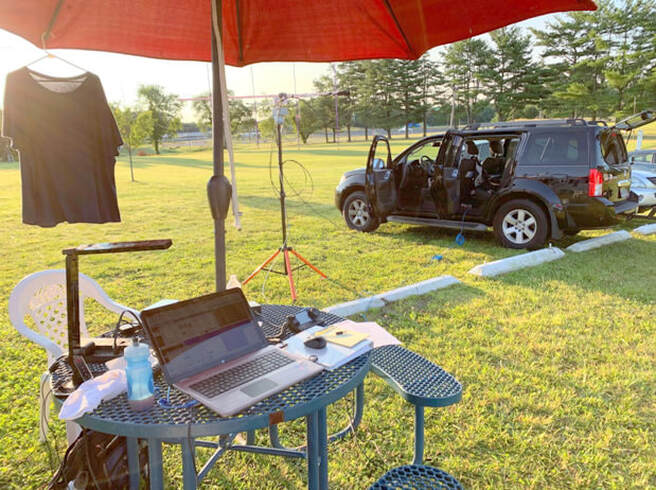 Come one, come all, to the largest annual on-air event in the country, Field Day!
By Al Arrison, KB2AYU

On June 22-23, Hams nationwide will take to the great outdoors, setup portable stations, and try to contact as many other stations as possible. This is done as an emergency preparedness exercise to simulate operating with minimal equipment under less than ideal conditions. The GCARC participates from our Club Site at the Gloucester County 4-H Fairgrounds in Mullica Hill.
​
You DO NOT have to be a veteran contest operator to have fun. Newer Hams are encouraged to come out. Saturday morning help is needed erecting antennas and setting up stations. Everyone goes on the air at 2PM. You can observe different operating techniques or give someone a break and make some contacts yourself. At 2PM Sunday, the event is over and help is needed breaking down and cleaning up.

Please plan to come out, even if just for a little while, and take part in this worthwhile event.

And Now The Most Important Part Of Field Day - The Food!!!
By Jeff Garth, WB2ZBN

Here is a list that I have so far, of who will donate what :
The Club will provide the standard fare, hamburgers, hot dogs, rolls, baked beans, etc. Plus the world famous Sunday morning breakfast!

We could use some more desserts and side dishes.

Also, if anyone would like to volunteer with the food preparation, please let me know.

Taking something new into the field on field day can an exciting challenge. What will we see this year? The entrepreneurial spirit in our Club members has brought out some interesting innovations. History has shown how having a better directional antenna with some gain boosts enjoyment and point scores. So does selecting a good enough radio to use that has sufficient front end sensitivity in the presence of other local transmitters!

Whatever it takes to make more contacts and score more points is fair game, within the rules. 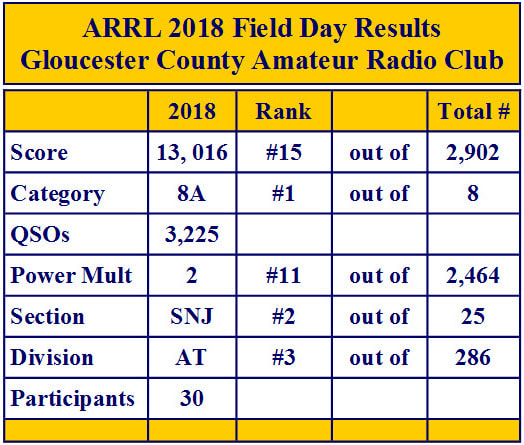 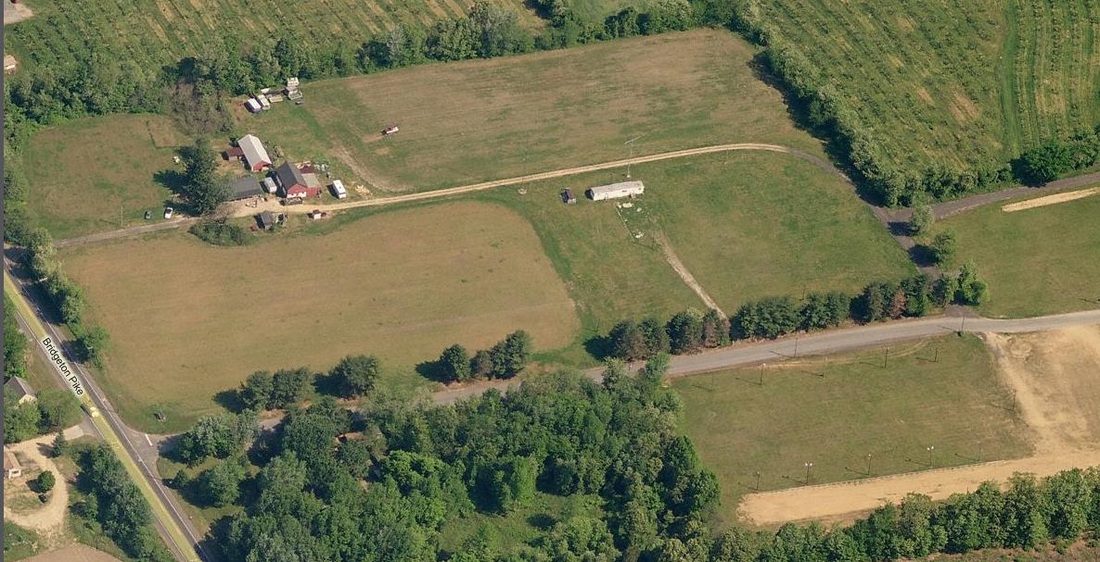