Back to GCARC Fox Hunts

It was a mad scramble at the end, but Congratulations to Vinnie (N4NYY), first to find the fox!

Matt (N2EEE), who had been first to find the fox during the last hunt, had the honors of hiding the transmitter this time. He ended up selecting a hiding place for it up on a tree branch in the Dr. Robert N Renlund Memorial Park in Glassboro, not far from Rowan University. With snow on the ground, to hide their tracks, he and his father had spent some time before the hunt started making "false footprint trails" all over the snow, to help throw off the hunters. After Vinnie found the transmitter, he ran around and helped make some more!

Some tried some "new tech" this time, but not all of it worked out. With the signals able to bounce off of a near by water tower, and with the antenna being flush against a tree branch, some could hear the signal faintly when they started out, but weren't sure which way to go to get it. Al had a new attenuator in-line between his radio and his hand-held directional beam, but had trouble knocking down the signal in close to get a good fix.

Jim tried out an SDR receiver plugged into a laptop with a small antenna inside an open-ended metallic coffee can, but had trouble holding all that gear, giving up and just going back to using an HT with no antenna, until he was close enough to tune with a beam to the third harmonic. Vinnie came to the hunt with a brand new home-made tape measure beam antenna, and that worked great for him.

In the end, it really was a lot of fun! We posed for a group picture, and then had a great time hanging out afterwards exchanging hunt stories.

So, when's the next one? Probably around Thomas Jefferson's birthday (Saturday April 13), when it is a little warmer! Look for emails and a mention in Crosstalk when it gets a little closer. Everyone is invited to join in the fun!
​
​

​The transmitter will be somewhere in Gloucester county. Well, not just anywhere. It is limited to the following area

The fox hunt will start at 13:00 and lasts until the last person finds the transmitter. Be sure to check in the repeater just before the hunt so we know who's hunting It looks like there will be a high of 39F, so we will finally get away from this freezing weather. 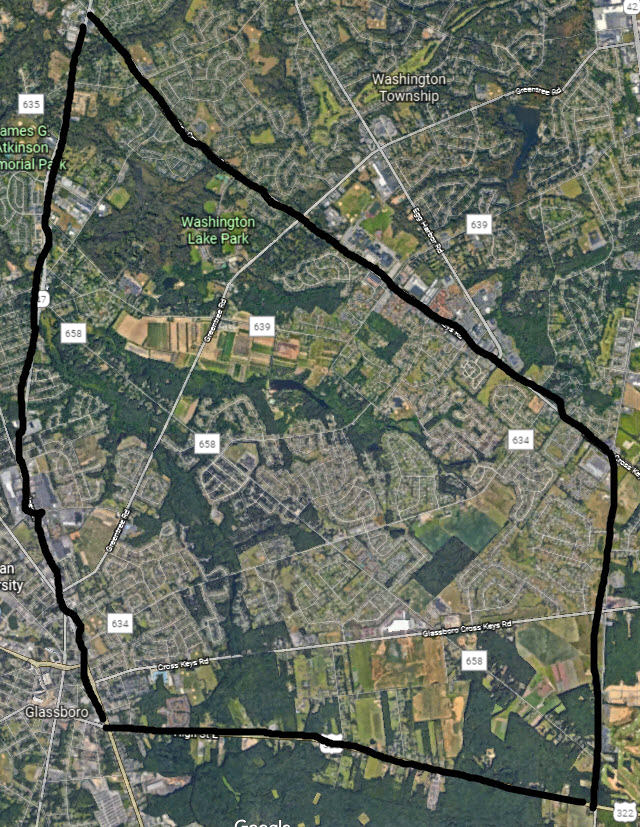