Back to GCARC Fox Hunts

What The Heck Is That?
By Jim Wright, N2GXJ

On the sunny afternoon of February 9, your fellow GCARC Club members were out on another wildly popular radio fox hunting event. This time, the fox was Frank, N3PUU, and the hunt area was in the Scotland Run Park area, in the vicinity of Williamstown.

Many took to this challenge using a “warmer / colder” technique, where the signal is strongest when you are closer, and weaker when further away. Others used a directional “beam” antenna, like an “arrow” antenna, or a home made “tape measure beam” to try and determine the direction of the transmitter, and then home-in on it that way. But those were not the only ways to hunt the fox.

Playing of the phrase “.or any technique of the hunter’s choosing”, this strange looking home-brew contraption took to field in this hunt.

What the heck is this?
Figured out what this thing is yet? I’ll give a clue. Instead of relying on signal strength, this gizmo can determine if there is a phase difference in a received signal between two sets of dipole antennas. Unlike the stronger/weaker or direction of strongest received signal (amplitude) approaches, this approach is independent of signal strength. What that means, in theory, is that a phase differential approach can be used at distance on weak signals, without using a beam antenna, or close-in on strong signals without needing to knock down the signal by removing the antenna or using an attenuator, or having to jump to the third harmonic.

Karl, W2KBF, tried a similar variant on this approach, by turning his auto into a porcupine, with multiple TDOA antennas to give a directional bearing to where the transmitter might be located.

Karl installing TDOA antennas on the roof of his car 10 minutes before the hunt was to start
Did either the phase differential or TDOA approaches work? No, not really. The hand held beam antennas ruled the day, with Al and Matt finding the transmitter first, and at the same time!

Oh well, it was fun trying, and wow, we just could not have gotten better weather. What a gorgeous day for a February fox-hunt! And what a great hiding spot, Frank!

A bunch of teams started in the “obvious” parking lot in the south-west corner of the hunt area - but quickly gave that area up when no signal was heard there even with directional antennas. Back in our cars, we progressed up Fries Mill Rd, around the borders of the hunt area, trying to pick up the signal. It turned out we were miles away from where it was hidden. We didn’t start getting faint hits until we drove along Route 322, along the north edge of the boundary area, but that’s the only place we heard the signal from. There was no signal to be heard along the other border, Tuckahoe Rd.

Like other hunt teams, soon we began to suspect a bike trail we could see on our maps that we had crossed over while driving the perimeter. The bike trail was at the north end, cutting through the hunt area from Fries Mill to County Rd 555. Problem for us was, there were no obvious drivable paths off of 322 to get to where it seemed that the transmitted signal was coming from. Going through the sand pits was not going to be a short cut option for us, though apparently it was tried by another team, and they got stuck! With spinning tires, things were not looking good. Everyone had to get out and push (ask Herb, Ken, and Vinnie about that!). But they did get out. Back to the chase!

Al figured out the bike path early, but starting from the Fries Mill side, he must have walked an extra half a mile down this bike path, just to meet up where we, and other hunters, were already getting out of our cars to start searching on foot. The key for us was finding Whispering Woods Rd that allowed the bike path to be bisected as it passed through a neighborhood. From there, the direction could be determined, and the hunt continued on foot down the bike path.

In the end, the transmitter was found, with antenna protruding out on its side from a plastic tackle box, just off the path in the woods, several hundred yards down the bike path, past where the trail crossed over the Scotland Run Creek.

When the hunt was over, we all hung out, enjoying the great weather, exchanging hunt stories, and posing for a group picture. Then several of the hunt teams headed out to grab a lunch together - and possibly to start plotting strategies for the next great fox hunting adventure!

If you missed out on this one, no worries, there will be another in a few months. You can tentatively mark your calendars for Sunday, May 17, 2020. Should be plenty of time to prepare, if you wanted to pair up with other hams in our Club to make it a group outing to go after that one. Solo, or on a team, we’d love to have you out to have some fun on the next one! 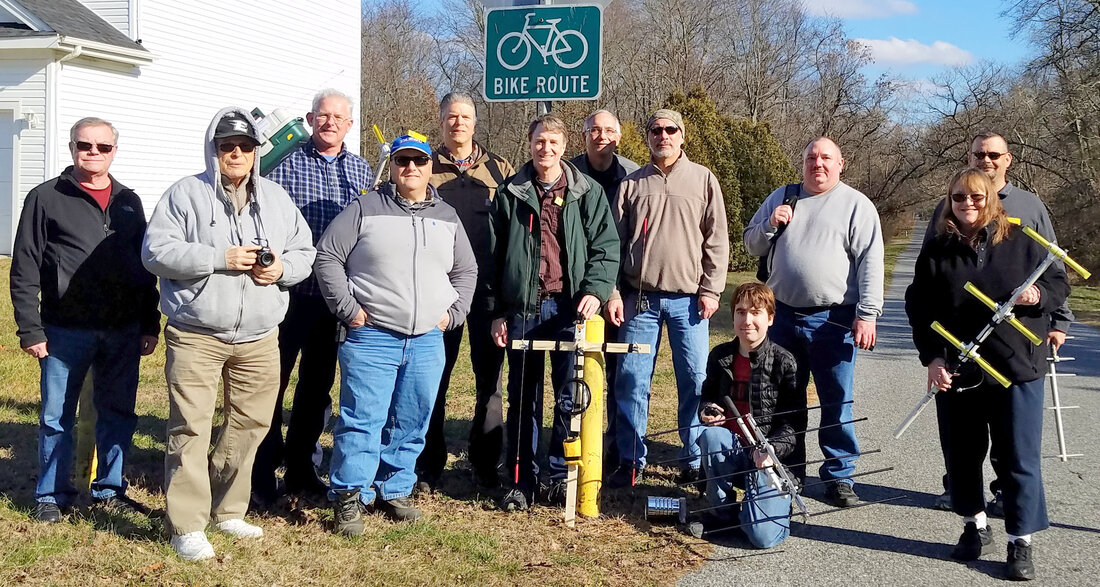 Hunters from the GCARC’s Fox Hunt XVI pose for a photo near where the transmitter was found
​Saturday, February 8, 2020

We will be Foxhunting tomorrow (Sunday, February 9) at 1PM!

The weather looks great for February - Mostly Sunny with a high of 49, so come out and give it a try!

It was mentioned during the last hunt that we don't foxhunt the Williamstown area often, so this time we will try just that.

Boundaries for this Foxhunt are as follows :
Below is a map of the Fox Hunt area.

For those interested in lunch after the hunt, we can pick a place when we meet up at the Fox tomorrow.

Best of luck to all the hunters! 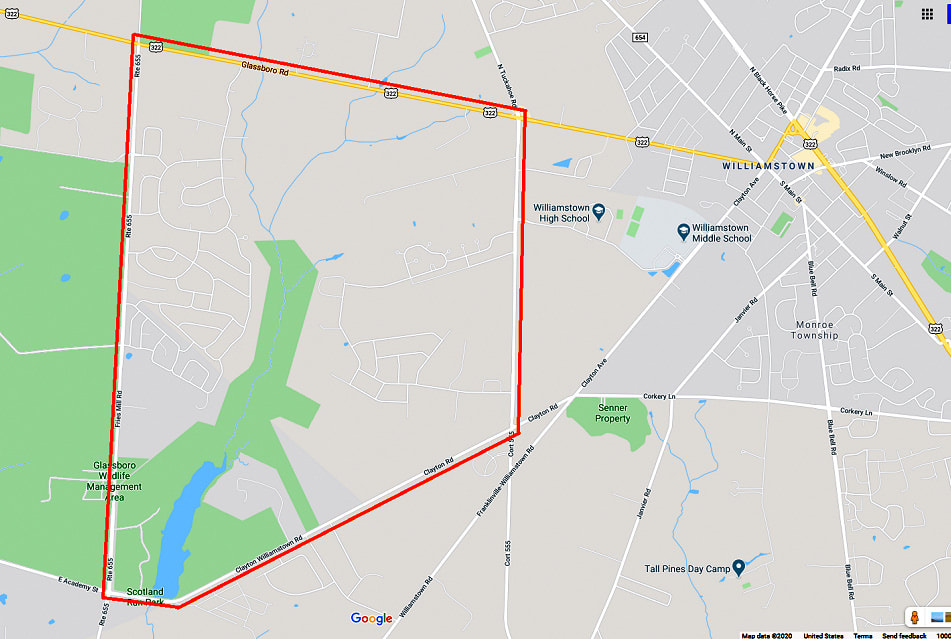