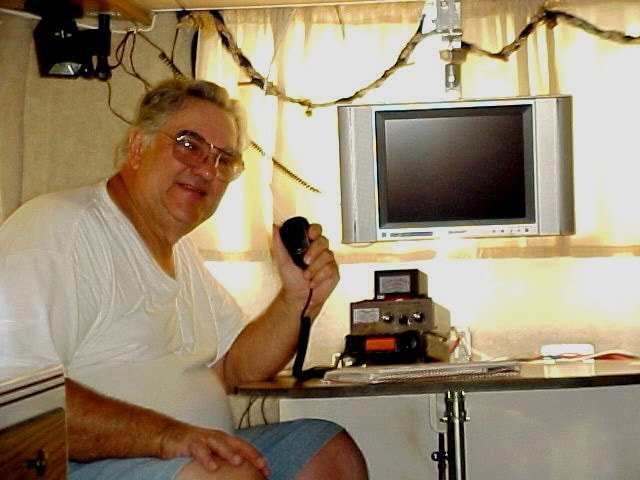 W2TDS and portable station in his Scamp Travel Trailer

Stephen graduated from Merchantville High School. He passed his ham radio exam while still in high
school. Stephen joined the Navy right out of high school and was an Electronics Technician on the USS Eleatty and USS Semmes. He attended Rutgers University in Camden on the GI Bill earning both an Associate and Bachelor degrees in Mathematics. Stephen worked many jobs including as a TV repairman and as a statistician for the NJ Department of Labor and Workforce Development, Division of Wage and Hour Compliance. He earned his master's degree in Public Policy from Rutgers University in 1996.

He was the leader of Cub Scout Pack 84 in the 1970s. He was also an umpire for both Glendora
softball and baseball. Stephen, W2TDS, was an active member of the Gloucester County Amateur Radio Club.

Steve and wife, Mary, loved to go on vacations. Shortly after retiring they drove to Alaska along with a bunch of other Scamp Travel Trailer owners. For many years they would go to Florida in the Scamp to see the Phillies Spring Training Camp. He especially enjoyed camping with his family.

Stephen was an active member of Trinity Lutheran Church in Runnemede.